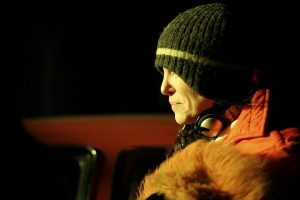 Ana Valine is a graduate of the CFC’s Directors’ Lab & Short Dramatic Film Program and WIDC at Banff. Ana has spent most of her life in the arts. From theatre, visual arts and writing to filmmaking, her creative endeavors have been enhanced with varied life experiences including a welder’s apprenticeship on the Alberta pipeline, training horses, tree planting and a brief stint doing phone sex. Ana’s films have screened and won awards internationally. She is writing her third feature screenplay, making commissioned videos and working on an MFA.

Where were you born, where did you grow up, where do you live now?
I was born on the coast in Northern California and moved around a lot. We lived on a farm for 10 years in Northern BC and I now live in Vancouver.

First film you made, and where and when?
alice & bastard, Maple Ridge BC, 2004

Latest film you made, and where and when?
C19 (a longer film about isolation), Vancouver BC, April 2020

What Canadian would you challenge to make an isolation movie?
Rufus Wainwright

In the history of cinema whose isolation move would you want to see?
Nell Shipman

Worst thing about being in isolation?
Uncertainty

Best thing about being in isolation?
Uncertainty

Favourite book to read in isolation?
The last book I read was “The Last Bad Man” by Miranda July

Favourite music to listen to in isolation?
This is musical exploration and discovery time!