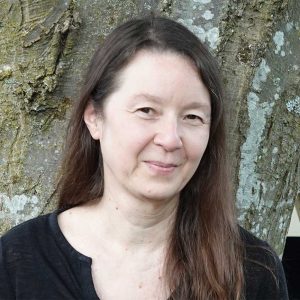 Ann Marie Fleming was born in Okinawa, Japan of Chinese and Australian parentage, and is currently living and isolating in East Vancouver. Her films often deal with themes of family, history and memory and blended identities. Ann Marie’s recent animated feature film Window Horses won Best Animated Feature at the Asia Pacific Screen Awards, Best Canadian and Best B.C. Film at the Vancouver International Film Festival and the Canadian Association of Online Film Critics named it Best Canadian Picture. Her graphic novel adaptation of her feature length animated doc, The Magical Life of Long Tack Sam (2003), was nominated for two Eisner Awards and won the Doug Wright Award for best Canadian Comic (2008). Ann Marie’s first film, You Take Care Now, is on the Essential Works in Canadian Cinema list as one of the top 10 Canadian short films of all time.

I was born in Okinawa, which was a UN protectorate at the time.  My birth certificate is from Korea. My first passport was British (my Chinese mother’s), my second Australian (under my dad), and now I have only a Canadian. I spent a few early years in Hong Kong before my family emigrated to Vancouver. I’ve lived in Stuttgart, Chicago, Toronto, my family has ye olde Newfoundland roots. I live in a little old blue house in East Vancouver with a big tree and some hand me down rocking chairs.

Technically, it was a variety show shot on video at Erik Hammer summer school in 1972.  But the first one anyone in the world has seen was Waving in 1987, a poem to my much loved, recently passed Grandmother, Mina.

– last film you made, and where and when?

I just finished a short animated film called Old Dog produced by the NFB. It should be available on-line any moment now. It’s about how vulnerable we all are.

I thank my blessings every day that I have this little old house, with its messy but aspirational veggie garden, it’s broken wood floor, and a nook big enough for my piano. It’s magical.

I think Trudeau should make one, if he has the time, because he’s been a role model in showing us how we CAN all isolate for significant periods of time and still run the country. It’s really made the effort serious, doable and human.

– whose isolation move would you want to see?

My mind races too much these days to sit and read a whole book, I’m afraid. I read the New Yorker and recipes.

Well, that’s an argument to have. Searching for comedies.

I have made it a point to cook something new every day.

Yesterday was hand-made chapatis with a potato aloo and kale curry.