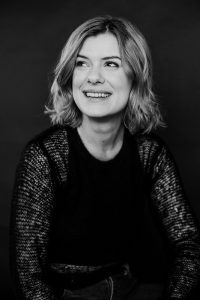 Anna Maguire is a British/Canadian writer, director and actress. Her directorial work has screened at festivals including TIFF, Palm Springs, PÖFF Black Nights and the BFI London Film Festival where she was nominated for Best Short with Your Mother and I in 2016. She has won awards at The London Short Film Festival, Thessaloniki, Rhode Island, and Underwire among others, was long listed for a BAFTA, and nominated for Best Short at the 2018 London Critics’ Circle Awards. As an actress, Anna recently performed in Kim Nguyen’s The Hummingbird Project alongside Salma Hayek, Jesse Eisenberg and Alexander Skarsgard and can be seen in the upcoming film Violation by Madeleine Sims-Fewer and Dusty Mancinelli. Anna is passionate about film education, especially in under-served communities. She has been a film tutor for the BFI Future Film Academy for five years. She also serves as a tutor on the screenwriting MA, Birkbeck College, London University. She is currently writing her first feature An Empty Space supported by BFI NETWORK.

Where were you born, where did you grow up, where do you live now?
I was born and grew up in London, England to two Canadian parents – my mother is from Trois Rivières in Québec and my father is from Vancouver. I spend time between the UK and Canada.

First film you made, and where and when?
2013 – ‘Don’t forget your mittens’ in London – a film about some of the anxieties of becoming an adult.

Latest film you made, and where and when?
2019 – It’s Nothing in Toronto – a metaphorical film about a young woman’s struggle with anorexia, written by Julia Lederer.

Describe your current living space.
When lockdown began, two close friends moved into my apartment with me. They’ve since left – it was always going to be temporary – but I was lucky to go through such a strange a disorientating time with people I love.

What Canadian would you challenge to make an isolation movie?
Sarah Polley – I love her work unreservedly and would love to see what she came up with.

In the history of cinema whose isolation movie would you want to see?
That’s an overwhelming amount of choice so I’m going to go with the first person who popped into my head – Maren Ade.

Worst thing about being in isolation?
The uncertainty of what the future might hold and the knowledge that there are many people suffering and getting sick. It’s a heavy time, but we seem to be at a point of global change – at least I hope we are – everything seems to be coming to a head.

Best thing about being in isolation?
Time to slow down a bit; it’s much better for my mental health.

Favourite book to read in isolation?
‘To the Lighthouse’ by Virginia Woolf.

Favourite music to listen to in isolation?
I’ve been listening non-stop to Anderson .Paak’s album ‘Malibu’.

Favourite movies to watch in isolation?
At the beginning of lockdown, we really delved into the 80s and 90s. It was great to re-watch Witness as an adult.

Favourite meal in isolation?
We all cooked for each other when my friends were here – that was lovely. Now that I’m alone it’s harder to muster the energy to cook properly, but I’m working on it!