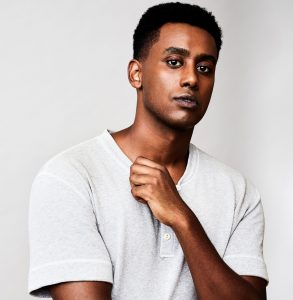 Araya Mengesha is a Toronto born/raised actor and emerging filmmaker. His stage credits include Breath of Kings (Prince Hal/Henry V) and Rice Boy for the Stratford Festival, as well as War Horse and The Lion King (Young Simba) for Mirvish Productions. His screen credits include recurring roles on TV series Anne with an E, Shoot The Messenger, Hemlock Grove, Rogue, and Mystery Hunters, as well as appearances in Hudson & Rex, Man Seeking Woman, and Saving Hope, and films Run This Town, Jean of the Joneses, and Nurse.Fighter.Boy. Upcoming: Netflix original series Tiny Pretty Things and Universal’s feature film Nobody.

Where were you born, where did you grow up, where do you live now?
I was born and raised in Toronto, Canada and I live here to this day.

First film you made, and where and when?
I guess you could call this the first film I’ve made as a filmmaker, I wrote and acted in a short called TEF in 2019, but my first film as an actor was Nurse.Fighter.Boy by Charles Officer in 2008.

Latest film you made, and where and when?
I played an Afro-Russian mobster named Pavel in a film called Nobody, we shot in Winnipeg last fall, that will be in theaters February 2021.

Describe your current living space.
I live in a quiet apartment, in the Dufferin Grove area of Toronto.

What Canadian would you challenge to make an isolation movie?
Cory Bowles.

In the history of cinema whose isolation move would you want to see?
I wanna see Spike Lee’s isolation movie.

Worst thing about being in isolation?
Experiencing the world through screens even more than I already did.

Best thing about being in isolation?
If you can call this a best thing; seeing that it has exposed so much of what has been able to be actively suppressed – and what appears now to be a tipping point. And cooking.

Favourite book to read in isolation?
Between the World and Me by Ta-Nehisi Coates.

Favourite music to listen to in isolation?
Throwback R&B playlists and any of the Verzuz battles on Instagram.

Favourite movies to watch in isolation?
Coming to America, City of God, Remember the Titans.

Favourite meal in isolation?
Breakfast: anything and everything that is breakfast.