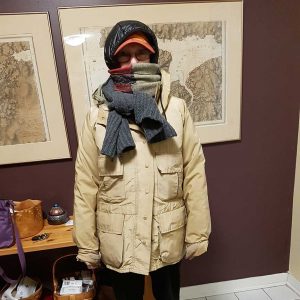 Barbara Sternberg is currently self-isolating in Toronto. Her films have been screened widely across Canada as well as internationally at the Pompidou Centre in Paris, Kino Arsenal in Berlin, The Museum of Modern Art in New York and the Cinematheque in Toronto. Her film Like a Dream That Vanishes is on the Essential Works in Canadian Cinema list as one of the top 15 Canadian experimental films of all time. In 2011, Sternberg was made a Laureate of the Governor General’s Award in Visual and Media Arts.

First film I made was a fake home-movie for my then husband whose family immigrated as a result of WWII and had none. It was 1968 and I used my Dad’s home-movie 16mm camera. But the first film I really made was in Sackville, New Brunswick a 3min. Super 8 film, “A Study in Blue and Pink” in 1976.

3-bedroom apartment, one of which is my film studio, on Bathurst St.- old building so roomy and lots of windows and cupboard spaces including linen closet, cedar hall closet! and noise and dirt from Bathurst though less now since Covid!

silence – and hope that this will bring CHANGE