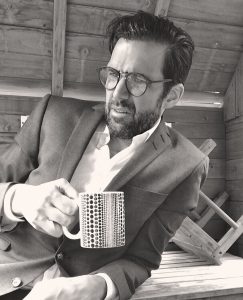 Benjamin Ayres is a leading performer in the film and television industry, well known for slipping seamlessly between genres. After two seasons as a series regular on the CTV Comedy hit series DAN FOR MAYOR, Ayres nabbed the role of Dr. Zachary Miller for five seasons in the highly acclaimed CTV original series SAVING HOPE. He also played Eric Blake on HBO Canada’s Gemini Award-winning series LESS THAN KIND, for which Ayres received a Canadian Screen Award and Leo nomination. He was the chain-smoking sex addict with a morbid death obsession in JPOD, based on the Douglas Coupland novel of the same name. The role also garnered Benjamin a Leo nomination.

Benjamin splits his time between Toronto, Vancouver and Los Angeles with his wife and two daughters.

Where were you born, where did you grow up, where do you live now?
I was born and raised in Kamloops, B.C. and then moved to Vancouver for 10 years before landing in Toronto for the last decade with a Green Card and more time being spent in LA.

First film you made, and where and when?
Grade 5, Kamloops, re-enactments of all the Rocky fights. Slow motion blood spits and all.

Latest film you made, and where and when?
This one, with Erin, in our house when the kids fall asleep much too late.

What Canadian would you challenge to make an isolation movie?
James Dunnison.

In the history of cinema whose isolation move would you want to see?
I’d normally say David Lynch but I already feel like I’m living in one of his nightmares so I’m going with Charlie Chaplin.

Worst thing about being in isolation?
Not being able to work on set.

Best thing about being in isolation?
Not worrying about when I’ll be on set again.

Favourite book to read in isolation?
Calvin and Hobbes with my daughter.

Favourite music to listen to in isolation?
Trying to introduce my girls to new music but we’re mostly dancing to pop top-40.

Favourite movies to watch in isolation?
Anything not animated.

Favourite meal in isolation?
Brando’s Fried Chicken (Chef Brandon Olson is making it out of his kitchen at La Banane. It’s……the best).