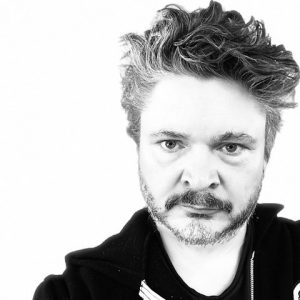 Blaine Thurier is a Canadian filmmaker, animator, and former founding member of The New Pornographers. His film have appeared at TIFF, Slamdance, and his first feature, Low Self Esteem Girl won Best Narrative Feature at SXSW. He has two upcoming features and is currently working on various animated projects.

Where were you born, where did you grow up, where do you live now?
I was born in Estevan, Saskatchewan and grew up in various places on the prairies and Alaska. I live in Vancouver now.

First film you made, and where and when?
My first film was Low Self Esteem Girl, shot in Vancouver in 1999.

Latest film you made, and where and when?
The last film I made was a short called Anxiety, also shot in Vancouver.

Describe your current living space
I live in an apartment in downtown Vancouver with my family.

What Canadian would you challenge to make an isolation movie?
Glenn Gould, would he were alive. He was pretty big on solitude.

In the history of cinema whose isolation move would you want to see?
Carl Dreyer.

Worst thing about being in isolation?
Getting fat.

Best thing about being in isolation?
Eating all the time.

Favourite book to read in isolation?
Escape from Evil by Ernest Becker.

Favourite music to listen to in isolation?
Bach, Bach, and more Bach.

Favourite movies to watch in isolation?
I’m catching up on my Bergman.