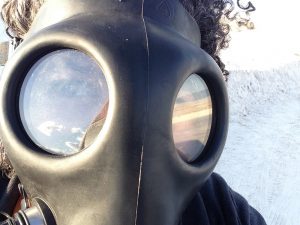 Christina Battle (Edmonton, Canada) has a B.Sc. with specialization in Environmental Biology from the University of Alberta, a certificate in Film Studies from Ryerson University, an MFA from the San Francisco Art Institute, and a PhD in Art & Visual Culture from the University of Western Ontario. Her research and artistic work consider the parameters of disaster; looking to it as action, as more than mere event and instead as a framework operating within larger systems of power. Through this research she imagines how disaster could be utilized as a tactic for social change and as a tool for reimagining how dominant systems might radically shift. She is a contributing editor to INCITE Journal of Experimental Media and collaborates with Serena Lee as SHATTERED MOON ALLIANCE. She has exhibited internationally in festivals and galleries as both artist and curator, most recently at: Latitude 53 (Edmonton), The John & Maggie Mitchell Gallery (Edmonton), Harbourfront Centre (Toronto), Capture Photography Festival (Vancouver); Forum Expanded at the Berlinale (Berlin), Blackwood Gallery (Mississagua), Trinity Square Video (Toronto), Untitled Art Society (Calgary), 8-11 (Toronto), Nuit Blanche Toronto, Galveston Artist Residency (Texas); Studio XX (Montreal), Le Centre des arts actuels Skol as part of Le Mois de la Photo à Montréal (Montreal), Thames Art Gallery (Chatham, ON), Casa Maauad (Mexico City); and SOMArts (San Francisco).

Where were you born, where did you grow up, where do you live now?
I was born in Edmonton, grew up in Edmonton and then lived in a bunch of other places, now back in Edmonton after having been away for almost exactly 20 years.

First film you made, and where and when?
I made some short things while taking film classes at Ryerson but my first completed film was oil wells: sturgeon road & 97th street in 2002. Shot in Sturgeon County outside of Edmonton of an oil well that is no longer there.

Latest film you made, and where and when?
Water once ruled in 2018. Shot mainly in Drumheller, Alberta but made while living in London, Ontario.

Describe your current living space.
I’m so lucky to have lots of space along with a private outdoor space where I’m building a new garden.

What Canadian would you challenge to make an isolation movie?
aAron Munson

In the history of cinema whose isolation move would you want to see?
Harun Farocki.

Worst thing about being in isolation?
In person conversations.

Best thing about being in isolation?
TIME.

Favourite book to read in isolation?
With the pandemic, figuring out how to make ends meet, a right-wing government in Alberta using the crisis to usher in draconian measures, more Black people being killed by cops, the protests in the United States, and on and on, I haven’t been able to read any books since this all started. My friend Zach Ayotte gifted me a small chapbook of Ursula K. Le Guin’s ‘The Carrier Bag Theory of Fiction,’ and it is the first thing I’ve really read other than the news in a while. Snippets from the text appear in this video.

Favourite music to listen to in isolation?
I’ve been loving the insta-live Questlove DJ nights – he’s been spinning records and schooling us on the history of Black music since the start of Covid and it is really amazing. He’s a wealth of knowledge.

Favourite movies to watch in isolation?
I’ve been watching a lot of episodic television (not new for me at all), and really like the form – lately I’ve been mainly watching stories that don’t require much to engage with.