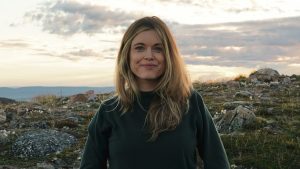 Corinne Dunphy is a documentary filmmaker from Antigonish, Nova Scotia. She began her career in filmmaking at the age of eight, writing scripts and filming them on her parent’s home movie camera. No one but her parents watched them. Years passed and because her little masterpieces never took off, she pivoted to serving tables at dingy restaurants and babysitting other people’s perfect children as she attended art school (BFA, NSCAD 2008, MFA Ryerson Doc Media 2013). School provided her an opportunity to connect with anxious, likeminded artists. It was there she had a solid artistic community of support and inspiration. She finally made a film that people watched in 2013 called Well Fished. It gained attention nationally and internationally at festivals. Corinne has crafted several short films since, commonly exploring everyday characters. She trusts that character-driven documentaries can speak volumes on larger social issues. Corinne currently lives in Iqaluit, Nunavut. She works at the Nunavut Film Development Corporation and cares for her very own perfect child.

Where were you born, where did you grow up, where do you live now?
Born and raised in Antigonish, Nova Scotia. Currently living in Iqaluit, Nunavut.

First film you made, and where and when?
In 2013 I made a short Well Fished for my thesis project in Ryerson’s MFA Doc Media program.

Latest film you made, and where and when?
I created two short docs for CBC’s Exhibitionists a couple years ago (perhaps three by now, yikes). Both were filmed in western Nunavut in Rankin Inlet. They were profiles on musician Kathleen Ivalarjuaq Merritt and dollmaker Helen Iguptak.

I have been trying to make a short film on birders for three years. It will probably be 5-10 minutes… yet there is no end in sight. Some of the challenges of parenting, working 9-5 and living in another territory. Ask me what films I WANT to make and I can go on forever! Currently dreaming of a feature on Funeral Food.

Describe your current living space.
I live with my husband of two weeks, my daughter of two years and a 7 month fetus in a seven-plex on the Road to Nowhere, Iqaluit. We look out to a tundra wall from our window, as well as a dead Christmas tree for year-round holiday joy.

In the history of cinema whose isolation movie would you want to see?
Would have been Robert Frank

Worst thing about being in isolation?
Being at home with a toddler

Best thing about being in isolation?
Being at home with a toddler

Favourite book to read in isolation?
I’m currently reading Collage: Contemporary Artists Hunt and Gather, Cut and Paste, Mash up and Transform. These days, my mind can only focus on picture books. Just finished Christopher Pratt’s The Places I Go, and Visual Feast. I read cookbooks at lunch.

Favourite music to listen to in isolation?
The same playlist I have been listening to for two years. It’s not my favourite, it’s just the go to. Raffi is on it. Elvis. Disney Music. To help me not go insane, I am listening to CBC’s Uncover podcasts.

Favourite movies to watch in isolation?
Haven’t watched many movies aside from home movies on my phone with my daughter. I did enjoy Godless on Netflix a few months back. For some reason the pandemic (or the pregnancy?) has given me an intense urge to watch Rom-Coms. But I always fall asleep before that happens.

What’s the last best thing you cooked?
I cook for convenience these days. We had Montreal bagels last weekend with smoked arctic char, capers, pickled onions and cream cheese on top. Classy and convenient. I pushed the toaster button down. They were delish.

Why did you commit to this?
I ask myself the same question. But it has felt so long since I committed myself to something creative, this project let me experiment and have some fun. Hopefully it will give me the motivation to continue! But now, I need to rest.