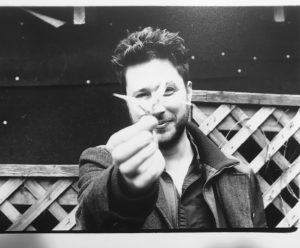 Dan Browne is a filmmaker and multimedia artist living in Toronto whose works explore patterns and nature through dense and kinetic forms. His films have been presented at over 100 festivals and venues internationally, including the Toronto International Film Festival, Rotterdam, Diagonal Film Archive, Centre Pompidou, Festival du nouveau cinéma, Early Monthly Segments, and Anthology Film Archives. Dan’s practice also encompasses live performances in collaboration with musicians, which have been presented at events such as MUTEK and Vector Festival, and video installations that have received public commissions in Toronto and Vancouver. Dan recently completed his PhD on Canadian cinema and has published writings on filmmaking in Incite Journal of Experimental Media, Found Footage Magazine, Hors Champ, and Millennium Film Journal.

Where were you born, where did you grow up, where do you live now?

I was born in Montreal and moved to Toronto at a young age. I currently live in the east end of Toronto.

First film you made, and where and when?
I’ve been shooting video since 2000, and film since 2001, but the first work officially listed in my filmography is Primary, from 2004. It’s made with ink applied to clear 16mm leader, which I did entirely in my bathtub.

Latest film you made, and where and when?
The last film I released is Lines of Force, which is a travelogue made during a brief visit to New York City in 2018. I’m working on several films right now, most of which are diary projects that are very long in the making.

Describe your current living space.
A small house built in 1928 on a moderately busy street, shared with my partner, our two children, a cat, a leopard gecko, and some houseplants. I can see the empty streetcars pass by from the window in front of my studio desk, which has now mostly been converted into a homeschool station and plant nursery.

What Canadian would you challenge to make an isolation movie?
I think all Canadian movies are already isolation movies to a certain extent — it’s ingrained within our cultural sensibility. But if I have to pick one person, I would challenge Brett Story.

In the history of cinema whose isolation movie would you want to see?
Buster Keaton.

Worst thing about being in isolation?
Childcare.

Best thing about being in isolation?
Childcare.

Favourite book to read in isolation?
My son and I just finished The Wild Robot by Peter Brown. It’s a terrific story about a shipwrecked robot who survives on a small island by learning the language of the animals. We’re working on the sequel now.

Favourite music to listen to in isolation?
Music creates mood and context, so it’s necessarily always a range. At times, it’s been helpful to listen to stuff that offers a lot of space, like Loscil, but I’ve also been regularly getting down to Massive Attack, A Tribe Called Quest and some dub techno mixes.

Favourite movies to watch in isolation?
My answer, out of necessity, is kids movies, as that occupies most of my screen time these days. I haven’t had the time or energy to watch what I would like to, but I am always interested in works made by friends. Now that I’ve finished my contribution to Greetings From Isolation, I look forward to checking out the other movies. Mostly I am listening to podcasts lately, as it’s something I can do while cooking or doing chores.

Favourite meal in isolation?
Increasingly, it’s the one day a week where we order takeout from somewhere.

Any other question you’d like to answer?
Maybe, but I’d prefer to ask one instead: will anything ever be the same again?