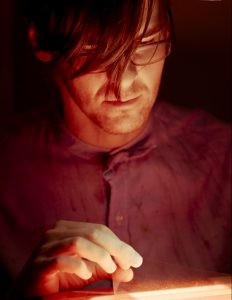 Where were you born, where did you grow up, where do you live now?
Born in Selkirk, Manitoba but currently living in Montreal.

First film you made, and where and when?
The first film I made was at The University of Manitoba art school, titled Party Killer.

Latest film you made, and where and when?
My latest film is titled The Collector and is in progress.

What Canadian would you challenge to make an isolation movie?
David Hoffos.

In the history of cinema whose isolation move would you want to see?
Brian de Palma.

Worst thing about being in isolation?
Celibacy.

Best thing about being in isolation?
Manic devotion to art and my inner life.

Favourite book to read in isolation?
Against Nature – J-K Huysmans.

What’s the last best thing you cooked?
My angelic neighbour cooks for me. Last night he made me butter chicken.