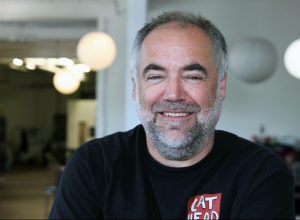 Daniel Cross is founder of EyeSteelFilm in Montreal, named by Real Screen Magazine as a top100 non-fiction production company in the world. He is an Associate Professor and previous Chair of the Mel Hoppenheim School of Cinema, Concordia University.

In November 2015 Cross’ latest feature documentary I am the Blues premiered at the prestigious International Documentary Film Festival in Amsterdam (IDFA), and won the Canadian Screen Award for Best Documentary.

He made his mark directing feature length films concerning issues of homelessness, The Street: a film with the homeless (1998), and S.P.I.T: Squeegee Punks In Traffic (2001). Together with eight Inuit students he co-directed the award winning film; Inuuvunga: I am Inuk I am alive (2004).

Daniel Cross is the father of 2 grown boys Gabriel and Nathaniel and life partner with Carolyn.

Where were you born, where did you grow up, where do you live now?
Buffalo, NY – Crystal Beach, ON – Montreal, QC

First film you made, and where and when?
Danny Boy, Montreal, QC, 1986

Latest film you made, and where and when?
I am the Blues, 2017, Mississippi

What Canadian would you challenge to make an isolation movie?
Terryll Loffler

In the history of cinema whose isolation move would you want to see?
Donald Brittain

Worst thing about being in isolation?
Isolation

Best thing about being in isolation?
Isolation

Favourite music to listen to in isolation?
John Lee Hooker