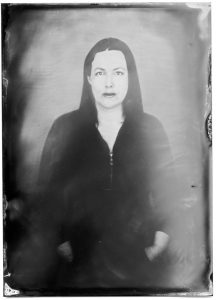 Elizabeth Lazebnik was born in Latvia. Her family migrated to numerous countries before settling in Canada where she has lived for the past 22 years. Elizabeth has been making films for over 16 years, with screenings at the Toronto International Film Festival, Festival du nouveau cinema, Female Eye Film Festival and Inside Out among other notable venues. She holds an MFA in Film Production from York University. In 2017 she won the K.M. Hunter Artist Award in Media Arts, administered by Ontario Arts Council. She is currently in post production on a feature film about the first surrealist photographer Hannah Maynard.

Where were you born, where did you grow up, where do you live now?
I was born in Latvia. Grew up in Latvia, Israel and Canada. I have been living in Toronto for the past 22 years.

First film you made, and where and when?
I made Icon Lamp at York University when I was doing my BFA in film in the early 2000s.

Latest film you made, and where and when?
The film is called Be Still. It’s about the first surrealist photographer, Canadian Hannah Maynard. It will be ready for festival submissions in 2021.

What Canadian would you challenge to make an isolation movie?
Taravat Khalili and Peter Mettler.

In the history of cinema whose isolation move would you want to see?
Agnes Varda.

Worst thing about being in isolation?
Having very little freedom. I am an introvert and don’t mind being at home most of the time, but the fact that I can’t do things and go to places when I want to has definitely started affecting me.

Best thing about being in isolation?
Being home with my family.

Favourite book to read in isolation?
Master and Margarita by Mikhail Bulgakov.

Favourite music to listen to in isolation?
My friend Anton Iguana Jones doing live Balkan DJ sets on FB from his living room.

Favourite movies to watch in isolation?
For some reason we watched Teen Wolf Too (not 2) and actually analyzed it yesterday…