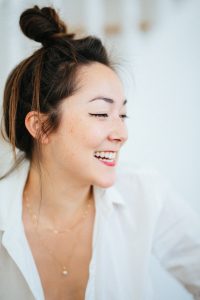 Emily Piggford is a queer, Canadian Screen Award nominated actress, producer, and creator of/collaborator on projects for stage and screen. Japanese mother and British father. Raised in whimsy and life/death reality on a farm on the west coast of Canada. As an independent filmmaker, Emily’s experience so far has been short pieces, like this, for personal projects and pleasure. She produced and starred in the award-winning digital series That’s My DJ, (creator/director D.W. Waterson). As an actress, recent credits include the Netflix series The Umbrella Academy, digital series Warigami (dir. Jason Lapeyre), and feature film The Cuban (dir. Sergio Navarretta). Next, Emily appears as Esther Ishikawa in the limited series The Sounds (dir. Peter Stebbings) filmed in New Zealand. Emily holds a BFA in theatre from the University of Victoria, is a graduate of the Canadian Film Center Actors Conservatory and an artistic associate of Impulse Theatre.

Where were you born, where did you grow up, where do you live now?
Born in Victoria, BC, Canada. Grew up an hour or so drive out of the city in East Sooke. Currently live in Toronto.

First film you made, and where and when?
Friends For Pig, a short I made in high school in Victoria starring a little, knitted pig.

Describe your current living space.
Top-floor of a house in the Annex. Bright. In-progress. Feels like a capsule of the old farmhouse house I grew up in, especially like waking up from naps in summer as a kid.

What Canadian would you challenge to make an isolation movie?
J Stevens, Shailene Garnett, and Randall Okita.

In the history of cinema whose isolation movie would you want to see?
Hayao Miyazaki.

Worst thing about being in isolation?
When worry and uncertainty become immobilizing.

Best thing about being in isolation?
A pressure cooker for inner work and learning to balance rest with motivation.

Favourite book to read in isolation?
I read Women Who Run With the Wolves by Clarissa Pinkola Estés in a sort of isolation a couple years ago and recommend. This isolation, I began by finishing Dare to Lead by Brené Brown, starting On Earth We’re Briefly Gorgeous by Ocean Vuong.

Favourite music to listen to in isolation?
Country, to feel like myself and sing to.

Favourite movies to watch in isolation?
Catching up on significant titles on my lists I still haven’t seen yet. Recommended recent watches: There’s Something in the Water and The Biggest Little Farm for docs, BlacKkKlansman and Firecrackers for fiction, J’ai Perdu Mon Corps and Onward for animated, also all the Forky Asks a Question shorts for absurd laughs and low-key profundity. Shout out to series: When They See Us and Sex Education.