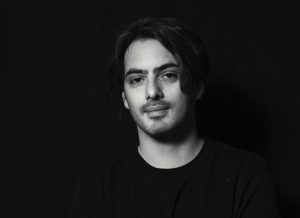 Fabián Velasco is a Canadian-based filmmaker originally from Buenos Aires, Argentina. He has written and directed several short films and music videos, most notably Imitations (2016), which premiered at the Toronto International Film Festival. Recently, his feature film debut Tapeworm premiered at the 2019 Vancouver International Film Festival and at Slamdance 2020 in the U.S.

Where were you born, where did you grow up, where do you live now?
I was born in Buenos Aires, Argentina and moved to Winnipeg, MB with my family at the age of 14.

First film you made, and where and when?
First film I remember making was a stop motion animation when I was 14-ish in which a Nike sneaker falls down from the sky and stomps a plasticine worm.

Latest film you made, and where and when?
Feature film Tapeworm, shot all around Winnipeg between 2017-2018.

Describe your current living space.
Spacious 2-bedroom character apartment with high ceilings and a fire escape that I use as a balcony.

What Canadian would you challenge to make an isolation movie?
Martin Short.

In the history of cinema whose isolation movie would you want to see?
Roy Andersson.

Worst thing about being in isolation?
Not so much anymore but early on waiting 40 minutes in line to get into Safeway.

Best thing about being in isolation?
All the free time to provoke and instigate in online soccer forums.

Favourite book to read in isolation?
I read The Hawkline Monster by Richard Brautigan and currently reading Among the Thugs about English soccer hooligans in the 80s.

Favourite music to listen to in isolation?
Cringy (yet goosbumpy) 90s Argentinian rock.

Ffavourite movies to watch in isolation?
I don’t think I have a favorite, but Salo was the first movie I watched after it was declared an official pandemic.

What’s the last best thing you cooked?
Spaghetti and pesto.