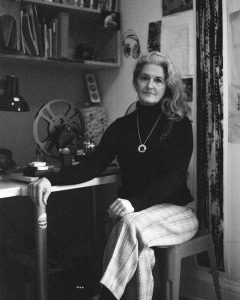 Where were you born, where did you grow up, where do you live now?
I was born in Santiago Chile and grew up in Toronto. I live in Kensington Market in Toronto.

First film you made, and where and when?
Tales from my childhood (1991). I made it at Queen’s University. It was shot in Chile, Toronto and Kingston, Ontario.

Latest film you made, and where and when?
My latest film is called It Matters What (2019) and I made it at Phil Hoffman’s film farm in Mount Forest, at Percy Lake and at LIFT. I am finishing an experimental documentary, Vestigial, that was shot in the north of Germany. I have also been collecting people’s dreams since March 10 and I have so far made 3 dream videos sketches.

Describe your current living space.
I live in a 3-storey house in Kensington Market with my husband David, our youngest son Tomas (18) and our black lab Milton.

What Canadian would you challenge to make an isolation movie?
Filmmaker Terra Long.

In the history of cinema whose isolation movie would you want to see?
Maya Deren.

Worst thing about being in isolation?
The uncertainty and stress. Not seeing my family and friends. Our isolation began at the end of February because David had a pulmonary embolism and was immune compromised.

Best thing about being in isolation?
I’m kind of reclusive and like being at home. Just not this much.

Favourite book to read in isolation?
The Outline Trilogy by Rachel Cusk.

Favourite music to listen to in isolation?
Bright Eyes (this week).

Favourite movies to watch in isolation?
David and I are rewatching Game of Thrones.

Favourite meal in isolation?
Tomas makes us elaborate meals. He made pork chops, buckwheat polenta, a seared kale salad, garnished with foraged knotweed and wild mustard greens on Mother’s Day. He will (hopefully) be starting at the Stratford Culinary School this fall.