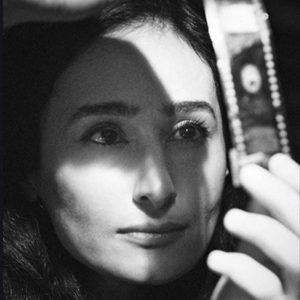 Gariné Torossian was born in Beirut, Lebanon in 1970 to Armenian parents and moved to Canada at the age of nine. After studying photography and film at York University in Toronto, she first worked as a photographer before turning her focus to film. After her first 16mm film, Visions, premiered at the Toronto International Film Festival, her second film, Girl from Moush, screened in the 1994 Panorama section of the Berlin International Film Festival. Her short films My Own Obsession, Sparklehorse and Babies on the Sun also screened at the Berlinale in 1998, 2000 and 2002 before her debut feature film, Stone Time Touch, premiered in the 2007 Forum section of the Berlinale. Retrospectives have been devoted to her work in Canada, London and Berlin. Her films focus on themes of memory, longing and identity, often in connection with her Armenian heritage.

Born in Lebanon, Grew up in Toronto. Living in Toronto and Yerevan.

To Make A Garden in Yerevan

– In the history of cinema who’s isolation move would you want to see?

Waiting for the vaccine

The Structure is Rotten, Comrade by Viken Berberian and Yann Kebbi