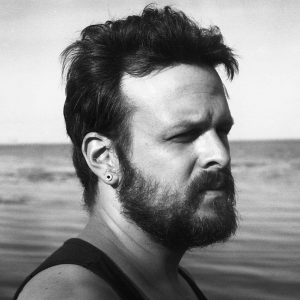 Experimental filmmaker, video artist and independent curator, Guillaume Vallée graduated from Concordia University with a Major in Film Animation and MFA in Studio Arts – Film Production option. He’s interested in alternative forms of moving images in analogue as a way of considering the direct interaction between different mediums. His work is an exploration of materiality within the creative process. In an attempt to create a more complex relationship with his subject matter, Vallée makes use of cross-medium forms that range from camera-less techniques to optical effects, glitch, video feedback, resulting in expended & hybrid pieces. He works mainly on Super8, 16mm and VHS. His work was awarded the The Yellow Ghost (Grand Prix Dérapage) in 2013, Best Canadian Work at the WNDX festival in 2016 for his short film, Le bulbe tragique and il fait gris dans ta tête, tout à coup, a videopoem created in collaboration with Sarah Seené, as part of Festival de Poésie de Montréal  received the Grand Prix Video-Poésie, 2018. Guillaume Vallée has been an artist-in-residence at La Bande Vidéo (Quebec, QC) in 2017 and at Le Fresnoy – studio national des arts contemporains (Tourcoing, FR), Signal Culture (Owego, USA) in 2018 and Studio 303 (Montreal, QC) in 2020. He’s currently an artist-in-residence at Main Film, part of the Film Factory program (2019-2020).

Where were you born, where did you grow up, where do you live now?
I was born and raised in Laval (Quebec), and I now live in Montreal (Quebec).

First film you made, and where and when?
In 2006, when I was studying in cinema at Montmorency College. It was some sort of animation with broken mirror, made with a MiniDv camera and some distorted John Zorn & Mike Patton music.

Latest film you made, and where and when?
Monsieur Jean-Claude, a 16mm experimental short film on toxic masculinity and stereotypes, based on Jean-Claude Van Damme persona in action flicks. (Almost complete! Been working on this one for some time).

Describe your current living space
5 ½ in Villeray, 3rd floor. I have two favourite spaces. First, the living room, in which there are tons of vintage decorations on the walls and a photomaton, and it’s where I play Sega Genesis with my son William. And second, my chaotic studio space with everything I use and collect for my work.

What Canadian would you challenge to make an isolation movie?
Sarah Seené, wonderful partner & artist.

In the history of cinema whose isolation movie would you want to see?
Luis Buñuel and Paul Sharits

Worst thing about being in isolation?
The heat during summer and no more live audiovisual gigs

Best thing about being in isolation?
Much more quality time to spend with my son and my partner. And as an introvert, less social anxiety. More time to pet my cat Zaza.

Favourite movies to watch in isolation?
Twin Peaks: A limited Event Series (not a movie but I liked it so much! Still re-watching episodes). Otherwise mostly short films; the work of Marie Losier, Peter Tscherkassky and Patrick Bokanowski, just to name a few. One of my greatest discovery was Matthew Rankin’s feature film The Twentieth Century, that I wasn’t able to see in theater.

What’s the last best thing you cooked?
Let say that I improved my vegetarian cooking skills.