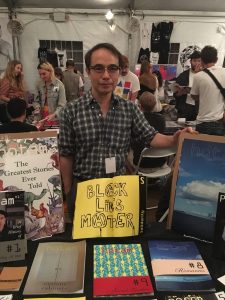 Ho Tam was born in Hong Kong and lives in Vancouver. He is a media/visual artist who has worked in advertising and community psychiatry. He received a BA from McMaster University and an MFA from Bard College (NY). Tam has exhibited in public galleries and alternative spaces across Canada, including the Canadian Museum of Contemporary Photography. His first video, The Yellow Pages, was commissioned by the public art group Public Access. Over 15 of his experimental film/video works are in circulation including screenings at Centre Pompidou, Paris, Toronto International Film Festival, Yamagata International Documentary Film Festival and the travelling exhibition Magnetic North: Canadian Experimental Video organized by the Walker Art Center, Minnesota. He also publishes artist’s books and zines. He runs the bookshop/gallery Hotam Press in Vancouver.

Where were you born, where did you grow up, where do you live now?
Born in Hong Kong and grew up partly there and partly in Toronto. Now I live in Vancouver.

First film you made, and where and when?
The Yellow Pages – it was made in Toronto in 1994, with assistance from Public Access at a projection program at Union Station.

Describe your current living space.
I share a two-bedroom apt with my partner in a co-op, in between Downtown Eastside and Gastown of Vancouver.

What Canadian would you challenge to make an isolation movie?
Someone who was living in the tent city in Oppenheimer Park.

In the history of cinema whose isolation movie would you want to see?
Agnes Varda – she would probably have something smart and personal to say about the situation.

Worst thing about being in isolation?
Losing track of time. The days are so long that I often feel like I am living one day like two, or even three.

Best thing about being in isolation?
Being able to live with the minimum.

Favourite music to listen to in isolation?
Most early 20th Century music – in the genre of The Great American Songbook.

Favourite movies to watch in isolation?
I have not been able to watch a full movie for a long time. I don’t really enjoy watching movies on the computer or TV. And I feel bad not being able to take advantage of all the free streaming options.

Favourite meal in isolation?
South Asian or Korean food – Spicy food (but not too spicy) makes me feel alive.

What’s the last best thing you cooked?
Brown rice, it goes with almost anything.

Is there something else you’d like to tell me?
Thank you for the invitation to take part in this project. It has helped me to examine my relationship with my work and has got me started on a contemplative exercise of recording ideas. I am on to the second book now.