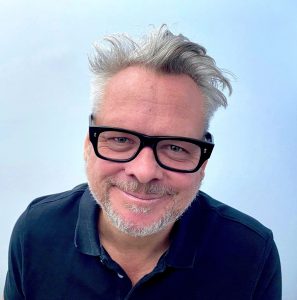 James Dunnison’s feature debut was the comedy/fantasy/thriller Stuff, which enjoyed international critical acclaim, including the Los Angeles Times calling it “consistently inspired and hilarious,” the Montreal Gazette saying “this film is to Canadian cinema what punk is to rock ‘n’ roll,” and the Globe and Mail calling it “buzz film of the year… Laugh out loud funny, sweet and inventive.” Dunnison also directed the TV pilot and six additional episodes of Todd and the Book of Pure Evil, 14 episodes of HBO Canada’s critical darling Less Than Kind and eight episodes of the SyFy/Space series Bitten. His other TV directing credits include Carter, The Listener, Lost Girl, Seed, Arctic Air, Blood Ties, Whistler, Godiva’s and Robson Arms.

He has won numerous national and international awards for directing both drama and comedy, and has two TV series and one feature film in development.

Where were you born, where did you grow up, where do you live now?
I was born on the West Coast and grew up half in Toronto, half in Vancouver.

First film you made, and where and when?
I made my first little Super 8 movie when I was 14. It was a comedy about a student taking revenge on an asshole teacher. I asked my English teacher to accept it in place of an essay that she’d assigned. Remarkably – given its content ­– she did.

Latest film you made, and where and when?
I recently made a 360-degree immersive short called Quick Bite of The City of Light. It explores the architecture around the Seine in Paris at magic hour.

Describe your current living space.
I live with my wife in a two-bedroom townhouse near Trinity-Bellwoods in Toronto. Sometimes my 21-year-old daughter joins. She spent months of the pandemic self-isolating with us.

What Canadian would you challenge to make an isolation movie?
Can I go viral with this (keeping to the theme)? If yes, I’d start with Mark McKinney, artist Mats Nordstrom and filmmakers Elisa Paloschi, Dwayne Beaver and William Morrison.

In the history of cinema whose isolation move would you want to see?
Well I’ve already seen a couple of Bunuel’s isolation pieces (my hero). Hal Ashby’s?

Worst thing about being in isolation?
Can’t socialize in close quarters, let alone hug anybody or even shake their hand.

Best thing about being in isolation?
The peace and quiet, and absence of air pollution.

Favourite book to read in isolation?
Am about to start the graphic novel “Killing and Dying” by Adrian Tomine. On first glance, it may be stiff competition to Bruce Springsteen’s soulful autobiography “Born to Run,” which I’ve been loving.

Favourite movies to watch in isolation?
We’ve been binging limited TV series. Stand-outs include re-watching old faves like The Americans, Ozark, Bodyguard and Line of Duty. But then we watched Giri/Haji. Holy. What a game-changer!

Favourite meal in isolation?
Homemade pesto spaghetti with salad, or delivery from Banjara, with a glass of some big ass Cotes-du-Rhone.

What’s the last best thing you cooked?
The pesto.

Any other question you’d like to answer?
Yes: I am in fact wearing pants during most Zoom calls.