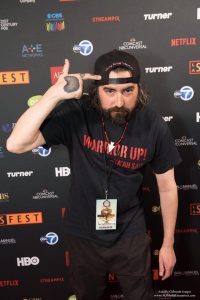 Living in: Vancouver, BC

Jay Cardinal Villeneuve (Nêhiyawi- Cree/Métis) was born and raised in northern Alberta and is an intergenerational residential school survivor who began acting on stage in community theatre productions when he was just a young buck. He went on to study Theatre in College, dropped out to pursue a career in film, and then graduated from Capilano University with a diploma in the Indigenous Independent Digital Filmmaking program.

Villeneuve concurrently worked as a video statement gatherer w/ the Truth and Reconciliation Commission of Canada, which set the impetus for his short documentary Holy Angels produced by the NFB, that won critical acclaim and several awards including a Leo Award for screenwriting in 2018. His comedy Is That One of Your

Jokes garnered him the Emerging Filmmaker Award at the 2017 LA Skins Fest in Hollywood. Jay played Scary Gary in Tracey Deer’s film Beans about the 1990 Mohawk stand-off at Oka, which had it’s world premiere at TIFF 2020, and Martin in Jessie Anthony’s feature Brother I Cry that premiered at VIFF in 2020. He can also be seen in The Body Remembers When the World Broke Open, playing Coyote in APTN’s Coyote’s Crazy Smart Science Show and as Phil in the Get Shorty Epix TV series.

Jay’s greatest honour is that he’s the proud papa of three awe-inspiring children who are often part of indie films with his production company, the cardinal cinéma c[art]el.

Where were you born, where did you grow up, where do you live now?
I was born in Aurora, Alberta — grew up in Slave Lake, Alberta and now live in Vancouver BC —> Coast Salish Territories.

First film you made, and where and when?
I made my first short film when I was 12 with the family camcorder in Slave Lake; a no-title horror comedy.

Latest film you made, and where and when?
My last film was the NFB produced short documentary Holy Angels, shot in Fort Chipewyan, Alberta and at Saint Mary’s Residential School in Mission, BC.

Worst thing about being in isolation?
Worst isolation thing = not playing ice hockey or watching NHL from the rink.

Best thing about being in isolation?
Best isolation thing = not having to deal with idiots.

Favourite movies to watch in isolation?
Favourite isolation movies = anything Horror and/or Comedy.