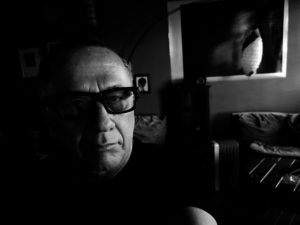 Jorge Lozano is an immigrant artist and filmmaker born in Colombia. He has been painting and filming, and making video, sound, performance and installation works since he came to Canada in 1971. He has made over 150 movies — works that live not in-between, but within cultures. His work is a reflection of his personal commitment to epistemological disobedience and the investigation of different ways of thinking, feeling and doing.

Jorge’s fiction shorts have been screened at TIFF and Sundance, and internationally at many festivals, museums and galleries. He initiated the Crossing Borders Film Festival, the aluCine Toronto Latin Media Festival and converSalon in collaboration with Alexandra Gelis. Jorge is currently working on several feature-length deliriums, architectural installations and film fetish short forms in Toronto, Ontario, where he lives.

Where were you born, where did you grow up, where do you live now?
Born in Colombia. I grew up in Colombia and I live in Toronto.

First film you made, and where and when?
I made my three first films in 1974, almost at the same time. A B/W Super 8 three-minute film made on Toronto Island. It is lost. At the same time, I made the second film in colour Super 8. It is lost too. I have 20 seconds of it that I just reused in a one-hour double screen super 8mm film that I made a few months ago. Both of those films were fiction with friends as actors. The last one is an experimental 3 minute colour Super 8 of Yonge Street around Sam the Record Man – drawing with neon lights as I move the camera.

What Canadian would you challenge to make an isolation movie?
I can’t answer. I guess I challenge everyone.

In the history of cinema whose isolation move would you want to see?
Kiss of the Spider Woman, from a book by Manuel Puig and Treatise on Venom And Eternity by Isidore Isou

Worst thing about being in isolation?
Loss of freedom and thinking of others who I know are in a worse situation than I am.

Best thing about being in isolation?
Creative time. The power of contemplation, imagining new forms of living and local and global coexistence between us and with all living things. Understanding that conquering nature is not the right approach, the possibility of real change and creating effective ways of political resistance.

Favourite book to read in isolation?
I have been reading amazing publications by Judith Butler, Paul B Preciado, Naomi Klein, Carolin Emcke, Marina Gržinić, Rita Segato and many more incredible, honest non-selfish people committed to the understanding and transformation of the ruling systems.

Favourite music to listen to in isolation?
I listen to African music, Salsa music, Experimental music, Ambient electronic, Noise, etc. When I get bored, I make my own.

Favourite movies to watch in isolation?
Movies that my friends are making.

Favourite meal in isolation?
I cook a different meal each day. I try not to repeat. Cooking and making films are similar to me.

What’s the last best thing you cooked?
A fruit curry.