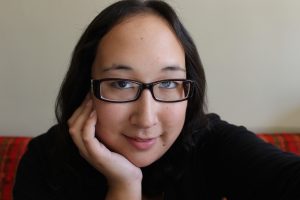 Justina Neepin is a Cree producer and filmmaker living in Winnipeg, Manitoba and a graduate of the University of Manitoba. After winning the inaugural RBC Emerging Filmmaker pitch competition at the Gimli Film Festival, she formed a production company with her sister JJ Neepin, called JJNEEPINFILMS. The pair have produced several short films that have played at National and International Film Festivals. Justina is also the acting President of the Indigenous Filmmakers Association and one of the co-founders of the Indigenous Film Summit. When Justina isn’t working, she volunteers her time with the Winnipeg Indigenous Filmmakers Collective and teaches workshops.

Where were you born, where did you grow up, where do you live now?
Born in Thompson MB, moved to Winnipeg for high school and university and I continue to live and work here in Winnipeg.

First film you made, and where and when?
My first short film was called Mark, about two people who have a mysterious encounter at a bus stop. I made it in 2012 in Winnipeg, with only 10K and cast and crew of less than 20 people.

Latest film you made, and where and when?
I’ve been constantly making experimental and scripted iPhone short films in the last couple years, some of which have played in local film festivals.

Describe your current living space.
I decided to stay outside the city with my sister and her husband during the quarantine. Me and my 2-year-old daughter have been staying with them in their house for 6 weeks. It’s a bigger living space than my Winnipeg apartment which means more room for a toddler to run around, and in this neighbourhood there are only a handful of houses, so social distancing is easy. But we’ve been separated from my husband because he had to stay in the city for work. We video chat him everyday, but we both miss him a lot.

In the history of cinema whose isolation move would you want to see?
I’m not sure, Stanley Kubrick already made an isolation movie with The Shining, but if he had to make a movie on his own at home, that could be interesting to see.

Worst thing about being in isolation?
The days seem to blend into one another and some days when I get some work done or maybe have cleaned the kitchen, at the end of the day I still feel like I haven’t accomplished anything.

Best thing about being in isolation?
I’ve found ways to be creative that I probably wouldn’t have if I had continued to work 12 hours a day on set. I have more time to test out ideas, make things, film short videos and just generally find creative outlets.

Favourite book to read in isolation?
I haven’t done much reading in isolation but I have started rereading old favourites such as Kelley Armstrong’s Otherworld series.

Favourite music to listen to in isolation?
Anything 90’s or early 2000’s that I can dance to.

Favourite movies to watch in isolation?
I’ve been re-watching favourite franchises such as Star Wars, Harry Potter, Lord of the Rings, but I’ve also been catching up on different series I’ve been meaning to watch or finish watching.

Favourite meal in isolation?
Anything with pasta.

What’s the last best thing you cooked?
I made a delicious and hearty chicken and vegetable soup.

What is a hobby or pastime you’ve picked up that you never expected to?
I’ve been making TikTok videos since the beginning of March and I’ve been having so much fun with it. I mostly make them for myself and to share with my family and friends to entertain them while we are socially distancing. It’s a chance for me be creative and spontaneous every day.