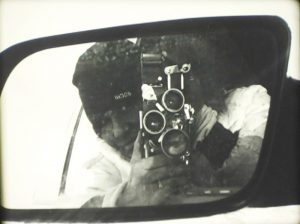 Living in: Vancouver, BC

Lindsay McIntyre (MFA/Inuit/Settler) is a film artist with a process-based analog practice which deals with themes of portraiture, place, form and personal histories. She is interested in the apparatus of cinema, representation and bridging gaps in collective experience. She applies her interest in film chemistry, emulsion and analogue technologies to make award-winning short 16mm films and expanded cinema performances. She was honoured with the REVEAL Indigenous Art Award from the Hnatyshyn Foundation (2017) and was named the Victor Martyn Lynch-Staunton Award recipient for Excellence in Media Arts by the Canada Council for the Arts (2013). She teaches Film + Screen Arts at Emily Carr University on unceded Coast Salish territory and anywhere else that people will listen.

Brittney Appleby (She/They) is an interdisciplinary artist and filmmaker living on the unceded territories of the Sḵwx̱wú7mesh (Squamish), Səl̓ílwətaʔ/Selilwitulh (Tsleil-Waututh) and xʷməθkʷəy̓əm (Musqueam) First Nations, otherwise known as Vancouver, BC. Brittney holds a Diploma in Fine Arts from Langara College and is currently in their final semester of their BFA at Emily Carr University of Art + Design majoring in Visual Arts. Their primary focus is in analogue film, photography, performance, and installation. Some of the themes they explore in their work are the body, chronic illness, memory and nostalgia. The use of experimental filmmaking techniques allows them to navigate the relationship between body and film, exploring different ways we tell stories and process familial trauma. Brittney has explored several experimental filmmaking techniques such as mordancage, optical printing, eco-processing, and chromaflex and is passionate about continuing to learn and cultivate a stronger relationship to analogue practices.

Where were you born, where did you grow up, where do you live now?
I was born and grew up in Edmonton, AB / Treaty 6 Territory.  I now live and work on unceded Coast Salish Territory in North Vancouver, BC.

First film you made, and where and when?
1999 Bug (10 mins) in Brooklyn, NY where I lived at the time. It’s made with 6000 insect wings and bug parts collected in Kenya and New York taped onto 16mm film with some optical printing.  Bit messy for projectors.

Latest film you made, and where and when?
Besides this one, Seeing Her (2020) silent hand-processed S16 colour reversal animation of my great-grandmother’s amauti and beadwork. I created it in the Griffin Art Projects summer residency in North Vancouver.

Describe your current living space.
A daughter, a dog and a lot of books.

What Canadian would you challenge to make an isolation movie?
Alethea Arnaquq-Baril.

In the history of cinema whose isolation move would you want to see?
Alanis Obomsawin.

Worst thing about being in isolation?
heads inside of boxes on screens. lack of equality.

Best thing about being in isolation?
Time to be with my daughter, take care of myself and make work accessible to more community (via heads inside of boxes on screens).

People recognizing that there is a lot about the way we live in the world that needs to change.

Festivals and programming from elsewhere that is now available to all.

Favourite book to read in isolation?
Stories in a New Skin by Keavy Martin.

Favourite movies to watch in isolation?
Greetings from Isolation and all the amazing festivals from other places that are online now.