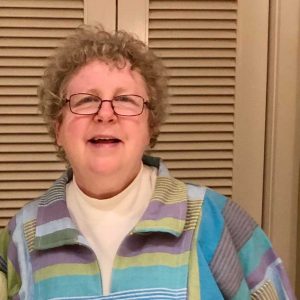 Martha Davis was born in London, Ontario and is a self-taught photographer, independent filmmaker/videographer, award-winning children’s book author, therapy dog handler and recently retired elementary school teacher based in Toronto. Martha received an Honours B.A. in Film and Drama from the University of Toronto and began her career as a still photographer, screening her films and exhibiting her photographs nationally and internationally since 1979. Martha has served on the boards of Directors of the Canadian Filmmakers’ Distribution Centre and The Funnel. Her short documentaries Elephant Dreams (87) and Reading Between the Lines (90) were both nominated for Genie awards. Her feature-length film PATH has been digitized from 16mm and is available for streaming on vucavu.com.

Where were you born, where did you grow up, where do you live now?
I was born and grew up in London, Ontario, the daughter of Rae Davis, one of Canada’s pioneering women Performance Artists. I went to the U of T in 1977, completing a double major in Film (theory) and Drama in 1981 and have lived in or around the Annex in Toronto ever since. I currently own and live in an attached house in Seaton Village. It has four finished floors and lots of natural light. I have a small office on the second floor, where the magic happens. It’s a bustling and stimulating space, filled with photographs on the walls and a huge shelf crammed to the gills with books, mostly about film and photography. I have a partner, Scott Whittington, who’s in Healthcare and a daughter, Molly, who is 20 and a student at Queen’s.

First film you made, and where and when?
The first film I made was in 1977, my first year at U of T. It was called “Oranges” and I shot it in Super-8, leaning out of the 2nd floor window of what was then “Mr. Gameway’s Ark,” on Yonge at Charles. It was sort of a performance piece. A man spills a bag of oranges on the street and I film whatever happens to follow. (Nowadays these are called ”interventions.”)

Latest film you made, and where and when?
For the first 15 years of my teaching career I made videos with my students, two or three per year. (One year I got carried away and made 10!) Under Premier Mike Harris the curriculum changed and teachers no longer had autonomy. I dropped my videomaking with my students, but began to write and publish books with them. This continued until my retirement in 2017. I only made one video for myself in the 2000s. It’s called “Alleyway Hip-Hop” and I made it in 2010 to show in the Toronto Urban Film Festival. It’s a vibrant dance film shot with a 10-year-old boy dancing in front of Toronto’s street murals. So I had a long, dry period with my work in moving images, though I was busy with writing and publishing children’s books of photographs and text: eight with my students, two with my daughter and four by myself.

About two weeks ago I learned how to use iMovie, and how to post to YouTube. The most recent film I made was just before HOUSEBOUND. It was called “Martha Loves Casey her Therapy Dog”. It’s 3 minutes long and I made it for St. John Ambulance because they are compiling videos to send out to seniors holed up in their residences during this pandemic

Worst think about being in isolation?
The worst thing about being in isolation is not being able to visit senior citizens with my therapy dog. It’s a big part of my weekly routine: 3 visits a week. I miss them terribly. We’re in touch by phone, letter and email, but it’s not the same for them as patting and hugging a little creature. Also, it sucks that my local movie theatre is closed, my Rogers on Demand is on the blink and Netflix is buffering and stalling all the time. Arrgh!

Favourite book to read in isolation?
I’m reading short stories by Ann Beattie, Raymond Carver, Patricia Highsmith and Roald Dahl (creepy stories for adults). I find I don’t have the attention span or the stamina for a novel right now. I’m listening to Bach, Telemann and Vivaldi, esp. Bach suites for cello with Yo-yo Ma.

What’s the last best thing you cooked?
Food. Hmmmmm. My partner does most of the shopping and he buys everything half price (past its due date). We eat like royalty for very little. Summerhill makes a chicken pot pie that’s to die for; we get it for $10 and it feeds three. I’m really trying hard to stay off sweets (I don’t drink or smoke, but I love my sugar!) and I’ve lost 8 lbs. in the last month. But the last best thing I cooked was peanut butter chocolate chip cookies!!