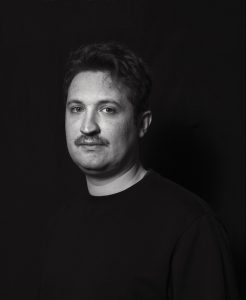 Milos Mitrovic is an award winning Canadian based Writer/Director born in Sarajevo, Bosnia. He is best known for his films Imitations (2016), homer_b (2017) and Tapeworm (2019). Mitrovic’s films bend comedy and drama to create an innovative style that grasps the attention of cinema lovers. Currently, Mitrovic teaches film studies at the University of Winnipeg.

Where were you born, where did you grow up, where do you live now?
I was born in Sarajevo, Bosnia. I came to Canada as a refugee in 1994. I became a Canadian Citizen in 1997. I have lived in Winnipeg, Manitoba since 1994.

First film you made, and where and when?
A Friday the 13th fan fiction movie when I was 13 with my friends. We shot it in a Winnipeg pick a flick video store. It was a lot of fun!

Latest film you made, and where and when?
The last film I made is called Tapeworm, a feature released in 2019.

Describe your current living space,
I live in an apartment in Winnipeg with my partner Stacie. Its a lot of fun and we hang out with my cat Penny everyday.

What Canadian would you challenge to make an isolation movie?
My parents.

In the history of cinema whose isolation movie would you want to see?
1980s Emir Kusturica.

Worst thing about being in isolation?
Having a terrible sleep schedule.

Best thing about being in isolation?
Playing the Friday the 13th video game with my partner and a few friends until 5am every day.

Favourite book to read in isolation?
The Denial of Death by Ernest Becker

Favourite music to listen to in isolation?
Oasis.

Favourite movies to watch in isolation?
All of the Friday the 13th movies.