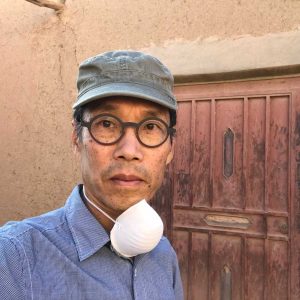 Richard Fung was born and raised in Port of Spain, Trinidad. Based in Toronto, Richard is a video maker, essayist, teacher, curator, and activist. He is currently isolating in a small riad in the Dades Valley in southeast Morocco where he and his partner are stranded. A Professor Emeritus in the Faculty of Art at OCAD University and a Rockefeller Fellow at New York University, Richard received the Bell Canada Award for Outstanding Achievement in Video Art and the Toronto Arts Award for Media Art. His single-channel and installation works, which include My Mother’s Place (1990), Dirty Laundry (1996), Sea in the Blood (2000), Islands (2002), Jehad in Motion (2007), Dal Puri Diaspora (2012) and Re:Orientations (2016), have been widely screened, broadcast and collected internationally.

I was born and raised in Port of Spain, Trinidad. In the early 1970s I moved to Dublin where I finished high school, and I came to Toronto two years later.

My first independent production is Orientations: Lesbian and Gay Asians (1984). It came out of my work organizing what we would now call LGBTQ Asian Canadians in Toronto.

My most recent project is Nang by Nang (2018), a portrait of my then 93-year-old cousin who as an “illegitimate “mixed-race woman wrote her own script in life.

I live in Toronto, but to celebrate my retirement my partner and I rented out our house and came to the Canaries and Morocco for the winter. Since the Moroccan government shut down all domestic and international travel as a response to the Covid-19 crisis now three weeks ago, we have been the only guests in a small riad in the Dades valley in southeast Morocco. We have a small but pretty room with six windows in a house built of pisé (mud and straw). There is a sunny courtyard with pomegranate, orange trees and roses.

– who’s isolation move would you want to see?

I have what Trinidadians call “hot foot,” which means I love to keep moving. So our lack of mobility is trying. I spend a lot of time in the kitchen and researching food, and, although the riad’s cook does a valiant job of supplying these eccentric foreigners with mostly meat-free meals, I miss my chef’s knife.

We are lucky to be in a stunningly beautiful place, but the only positive for me is that it might help us suppress the spread of the disease.

We only have three books, which we bought in Agadir, so not much choice. I’m reading La Civilisation, ma Mère!… by Moroccan author Driss Chraïbi. It’s slow going as I don’t read a lot of fiction in French and have to look up quite a few words.

We’re not listening to any music, and one thing I’ll likely miss when we leave is the purity of sound. There is an almost complete absence of motorized noise, so all we hear are the calls to the mosque, wind in the leaves and birdsong. I am a birder and my biggest joy is listening to the nightingales, which I only knew from Milton, Keats and Shakespeare. I can see why they inspired poetry.

I was surprised and thrilled to discover I had put Netflix on my iPad. But the Moroccan version doesn’t have much of interest that I haven’t already seen. Last night we watched Agatha Christie’s The Crooked House (2017). It had some big names, but in my opinion Max Irons isn’t compelling enough for the lead. They should have used Glen Close or Gillian Anderson instead.

In Toronto we always have steel cut oats in the morning, so breakfast here seems like an indulgence: orange juice, café au lait (I was not a coffee drinker), khobz (Moroccan bread) and m’semen or baghrir, the former akin to a paratha, the latter a cross between a pancake and an English muffin. We also get an egg each, boiled one day, as a flat omelette the next.

I cooked most of our weeks in the Canaries. The last meal I made was probably a dish inspired by huevos revueltos: onion, zucchini and eggs. Or it might have been pasta with a can of chick peas and a can of octopus or squid, flavoured with garlic, tomato, thyme and cumin. I love making tasty meals out of “nothing.”