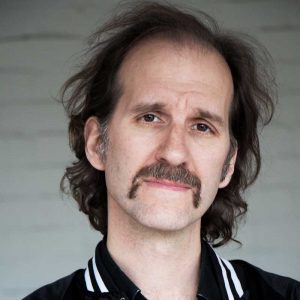 Robert Dayton is an artist, writer, and performer born in Fort St. John, BC and isolating in his brother’s spare bedroom in Surrey. He has recorded and toured in song and dance duo Canned Hamm, July Fourth Toilet, and as the glittery larger-than-life character The Canadian Romantic. Both Destroyer and Tonetta have written songs about him. He is currently writing a history of Canadian Glam and his pen-and-ink art book, The Empty Bed, was about heartbreak (Impulse b). In 2013, the Pagelicker video series, which he was host/co-creator of (Hazlitt/Random House), won a National Magazine award. Hosting variety shows since he was a child, eventually led to Robert starring in the 2004 film Male Fantasy: a comedy. Robert holds an MFA from the University of Waterloo.

I was born and raised up in Fort St. John, BC so isolation is nothing new for me. I am staying in my brother’s spare bedroom in Surrey for the time being. And I do actually aesthetically love the room -though others, as shown by Pandemic Get Away, may not.

I have been making The Canadian Romantic videos for a while now, which are on YouTube. Currently Fritzi Adelman and I are writing a projected comedy-horror series.

In the history of cinema whose isolation move would you want to see?

I keep thinking of the standards like Friedkin because he made a massive epic like Sorcerer but then he made Bug which is pretty isolation oriented. So no need. Or Hitchcock but then he made Dial M For Murder, a boring 3D procedural that mostly takes place in one room. Again, no need. And when I think of other more experimental or intimate filmmakers, well….I just keep coming up empty because so many of them have used isolation in their work. Can I get back to you?

I decided to explore Godzilla chronologically but stopped short during the 80’s revival; Mothra (the best movie monster, she fights for what’s right, and has miniature twin singing princesses) and Godzilla VS The Smog Monster (trippy sequences and a pro environmental message) were both absolutely wondrous. Matthew Rankin’s The Twentieth Century turns Canadian history on its head while being true to it, never flattening it. The doc There Are No Fakes by Jamie Kastner on TVO is intense and fascinating, about the Norval Morisseau art forgery ring. Kayla Lorette’s and Evany Rosen’s New Eden, a comedy about a 70s all-woman cult, was a great binge watch! Also, Ann Magnuson has been making some great Pandemic YouTube videos.

I am really loving the new Marker Starling, Castle If, Stephen Hamm’s Sunday night theremin meditation sessions, and I just discovered the music of Diane Dufresne.

That the awful things about the world will get more awful and so many vulnerable people will die. If you are asking about me personally, although I have had to make drastic changes, I am pretty lucky. Four years ago, I was renovicted and had to move a few times, have had endless career rejections, bed bugs, a cyber bully, and really awful heartbreak that required a year of therapy, all around the same time: this doesn’t compare. And though everything is uncertain, lots of people have it far, far worse.

That there is a chance that we can envision a better, post-neo-liberal world, that more community is already happening as people reflect on what is important. For me personally? A stillness while time seems to flow.

I was reading so many books before isolation that now I am doing a lot of writing! I saw that someone was reading My Year Of Rest And Relaxation by Ottessa Moshfegh and found that hilariously apt.

I’ve been cutting down but been craving pie, I may get a nice peach cobbler if there’s any available. It’s been years

Pandemic Get Away is a quiet no budget comedy with just one character. In isolation and never having truly faced himself or his feelings, as a means of avoiding this the main character obsesses over a small part of his surroundings looking for an escape from himself that he shall never find, the itch does not scratch well at all.