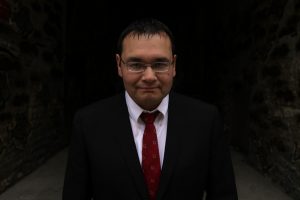 Roger Boyer is an Indigenous filmmaker based in Winnipeg, Manitoba. He is a writer, director, producer, and cinematographer. He has written, produced, and directed various short films, documentaries, and an independent feature film horror, which played for an extended 3 week run at the Landmark Towne 8 theatre in Winnipeg. Roger is a founder of the Winnipeg Indigenous Filmmaker Collective. This is a monthly meeting at the Winnipeg Film Group where local indigenous filmmakers network and help produce each other’s work. The Collective has been featured on Vice.com in an article titled “Is Winnipeg at the Forefront of Canada’s Aboriginal Film Scene?” Roger is also a founder of the Indigenous Filmmakers Association (IFA). The IFA is a non-profit group of local indigenous filmmakers and producers. The goal of the IFA is to help grow the indigenous film community in Winnipeg and Manitoba. In June 2018, Roger and other IFA Members founded Canada’s first Indigenous Film Summit, which was greatly attended by various indigenous filmmakers of all professional levels from Manitoba and across Canada. The Summit featured well-known speakers from the indigenous film community such as Eugene Brave Rock, Jesse Wente, Georgina Lightning, and Tina Keeper. In June 2019, the second Indigenous Film Summit was held with great success. Roger is also a mentor and producer for other local indigenous directors, with one of these directors winning an “Emerging Director” award at a film festival in Los Angeles. Roger is a Producer of three podcast shows on itunes: “Soul Unexpected with Adeline Bird,” “EverSick! with Stefan Richard,” and his own “Koj-B Films Podcast.” Currently Roger is developing a documentary, a new short film titled The Fire, and working towards his next feature: Coffee Express.

Where were you born, where did you grow up, where do you live now?
I was born in Brandon. I currently live in Winnipeg.

First film you made, and where and when?
I shot a campaign video on Canon miniDV when I ran for student council way back in University. I edited the video on Windows Movie Maker.

Latest film you made, and where and when?
Prior to this film, I wrote, produced, directed, shot and edited a short film called The Wolf. Shot with my iphone and edited on Davinci Resolve. The short film is available exclusively on my instagram (@kojbfilms).

Describe your current living space.
I live in a house.

In the history of cinema whose isolation move would you want to see?
Werner Herzog. He’d probably read passages from some book. I’d be ok with that.

Worst thing about being in isolation?
Having to push my feature film production until next year. I was looking forward to filming this year.

Best thing about being in isolation?
Extra time to work on my feature film script and extra time for reading. I have finished 3 books so far since isolation started. Somehow I feel I should have read more.

Favourite music to listen to in isolation?
Depends what time. But I should probably stop blasting G’n’R & ACDC at 3am.

Favourite movies to watch in isolation?
I just finished re-watching Chunking Express, Fallen Angels, & In The Mood For Love by Wong Kar Wai. He’s in my Top 5 favorite Directors.

Favourite meal in isolation?
Bannock and baloney. Or an egg wrap.

Any other question you’d like to answer?
My wife just asked me what I was doing and I told her. I hope that counts.