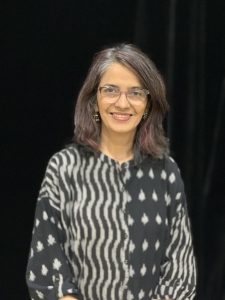 Shabnam Sukhdev is an award winning filmmaker and educator with undergraduate degrees in Psychology and Sociology, and a B. Ed in Special Education. She pursued her interest in filmmaking by obtaining a 3-year post-graduate Diploma in Cinema from the Film and Television Institute of India, Pune. She worked in the Mumbai film and television industry for 15 years before moving to Canada. Driven by a strong social conscience, her films revolve around core issues of identity and culture, feminism and sexuality, migration and mental health. Discrimination and human rights issues concern her deeply and are reflected as recurring themes in her work. She believes that a personal independent voice can deeply reflect the concerns of a society. Shabnam continues to nurture her formal filmmaking approach while pursuing her MFA in Production at York University, Toronto.

Where were you born, where did you grow up, where do you live now?
I was born in Mumbai, India – when my city was known as ‘Bombay.’ I did my undergraduate degree at Mumbai University, followed by a B. Ed degree in Special Education. I immigrated to Edmonton, Canada in 2002. I re-located to Toronto in 2016 after spending 7 years in India in between, during which time I made 3 feature-length documentaries.

First film you made, and where and when?
I made my very first film at the age of 21. It was for the Films Division, Government of India. Although it was meant to be a documentary about female adult education, I made a drama out of it, filmed entirely in a remote village close to New Delhi.

Latest film you made, and where and when?
My last docu-feature Peacock Plume was made in India in 2018. For the past couple of years, I’ve been making hybrid/ experimental shorts as an MFA student at York University.

Describe your current living space.
I live in an apartment in Don Mills, North York

In the history of cinema whose isolation movie would you want to see?
I would love to see what Abbas Kiarostami, Krysztof Kieslowski or Pedro Almodovar would make as their isolation movie!

Worst thing about being in isolation?
Loss of physical human touch.

Best thing about being in isolation?
Enhanced virtual communication.

Favourite book to read in isolation?
I’m unable to concentrate for long periods, so I prefer to read online articles and watch films.

Favourite music to listen to in isolation?
ALL classical music – Western and Indian.

Favourite meal in isolation?
Anything and everything starting with popcorn, fruits, Indian delicacies – it’s eat eat and more eat!

Any other question you’d like to answer?
Don’t let your mind move into the abyss of despair – force yourself to engage in what you love to do as much as is possible to prevent yourself from succumbing to the COVID crisis. Do what you can to help others the best you can.