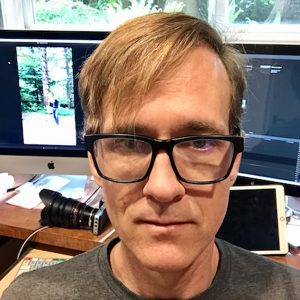 Where were you born, where did you grow up, where do you live now?
I was born in Peace River, Alberta, and grew up in Wetaskiwin, Alberta. I now live in West Vancouver, BC.

First film you made, and where and when?
I made my first drama on video in a visual arts class at the University of Calgary, but made my first short on 35mm film in Vancouver 2002.

Latest film you made, and where and when?
I am currently finishing a film called Voluntary, shot/shooting in Vancouver.

Describe your current living space
I live in a house built in 1952 with my wife and nine year old daughter. We have a great yard, which has been a life-saver during Covid-19.

What Canadian would you challenge to make an isolation movie?
Craig Wallace

In the history of cinema whose isolation movie would you want to see?
Andrei Tarkovsky, although I think I’ve already seen it.

Worst thing about being in isolation?
Eating every meal at home.

Best thing about being in isolation?
I get to spend copious time with my daughter, and influence her more than usual.

Favourite music to listen to in isolation?
Beirut is the only thing I can listen to right now.

Any other question you’d like to answer?
How do I feel about being the primary homeschool teacher of a nine year old?
It’s hard. I love it.