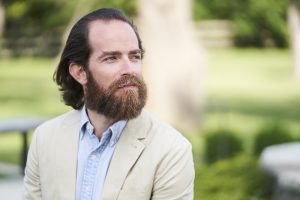 Simon Gadke is a screenwriter from Toronto. He was a resident of the 2019 Cineplex Film Program Writer’s Lab at the Canadian Film Centre. His first screenplay, ‘A Romantic Comedy,’ is in development with producer Natalie Urquhart. He’s also written several novels (unpublished) and read the major works of Henry James. Currently, he’s watching Michael Haneke’s entire filmography hoping it won’t do for his screenwriting what Henry James did for his fiction. However it happens, he’s interested in telling stories that push the psycho-pathological elements of everyday life to absurd and surprising conclusions.

First film you made, and where and when?
Can’t remember the name or exact date, but probably the summer between 8th and 9th grade. It was basically a “Muskoka Goodfellas” made with a 13-year-old sensibility and all the editing done in the camcorder. It was, predictably, shot in Muskoka.

Latest film you made, and where and when?
A Masterclass commercial spoof, in my apartment, during quarantine.

What Canadian would you challenge to make an isolation movie?
All time: Norman McLaren.
Our time: Tom Green.

In the history of cinema whose isolation move would you want to see?
The Marx Brothers.

Worst thing about being in isolation?
The ever-increasing lack of focus.

Best thing about being in isolation?
Guilt-free afternoon movie watching.

Favourite book to read in isolation?
We were in Venice when the outbreak started and it made that unreal city feel so much more unreal. I kept thinking: I’ve been here before. When we got back I re-read Invisible Cities by Italo Calvino and realized, in a way, I was right.

Favourite music to listen to in isolation?
Rameau and Couperin and Scarlatti keyboard works played on the pianoforte.

Favourite movies to watch in isolation?
Close-Up was the most powerful. But thinking of Harpo Marx trying to clear passport control in Monkey Business is still making me laugh, and it was one of the first flicks I watched in isolation.