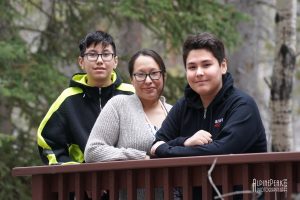 Janine Windolph and her sons, Dawalri and Corwyn, have recently started to collaborate on films as part of their homeschooling. Janine’s background as a filmmaker has featured family stories through documentaries, such as Lifegivers: Honoring Our Elders and Children (2007) and Stories Are In Our Bones (2020) produced through the National Film Board. The next film in development is Our Maternal Home: Waswanipi that will be made in June 2021 and produced by the NFB.

Where were you born, where did you grow up, where do you live now?
I was born in La Ronge, Saskatchewan, and my sons were born in Regina, Saskatchewan. While Regina is home, we stay in Banff, Alberta where I work.

First film you made, and where and when?
My first film featured my sons and family stories called Lifegivers: Honoring Our Elders and Children, made in Regain in 2007.

Latest film you made, and where and when?
The last film we made together that I directed is called Stories Are In Our Bones, made in La Ronge and released in 2020. This film also features my sons journey of learning to fish in the North.

Describe your current living space.
My home in Banff, Alberta is a loft style home situated on Tunnel Mountain, also referred to as Buffalo Mountain.

What Canadian would you challenge to make an isolation movie?
Troy Isnana

In the history of cinema whose isolation movie would you want to see?
Alanis Obomsawin

Worst thing about being in isolation?
Interacting with the community through public events.

Best thing about being in isolation?
Being able to catch up on my hobbies that were often put aside with work and a busy lifestyle.

Favourite book to read in isolation?
The Marrow Thieves by Cherie Dimaline. My sons read it too. Great book!

Favourite music to listen to in isolation?
White Horse is my favorite duo!

Favourite movies to watch in isolation?
I re-watched every Resident Evil film as my favorite series but my favorite film is World War Z.

Favourite meal in isolation?
Too many meals but we love vegetarian chili.

What’s the last best thing you cooked?
Chai Cake for my sister’s birthday.