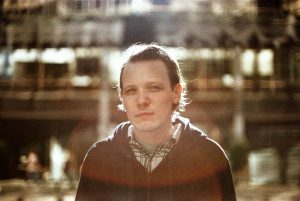 Winston DeGiobbi is a filmmaker based in Cape Breton, Nova Scotia. His first feature film Mass for Shut-ins premiered at the Vancouver International Film Festival. He is currently in post-production on his second feature Two Cuckolds Go Swimming.

– where were you born, where did you grow up, where do you live now?
Born and raised in Cape Breton, Nova Scotia. Living in Cape Breton right now.

– first film you made, and where and when?
The first film I made that had a public screening goes back to 2012.
A 27 minute short called Buggery about male prostitutes who hang out and meet their Johns at an arcade in the mall. It was all shot in Sydney and New Waterford, NS. The mall we used no longer exists.

– the latest film you made, and where and when?
My new feature. It was shot here in Cape Breton. We started in November and wrapped on December 7th.

– in the history of cinema who’s isolation movie would you want to see?
I feel compelled to choose a dead filmmaker, yet, I keep thinking about Kenneth Anger, who is still alive at 93. I want to see HIS isolation film. A Hero in the danger zone.

– worst thing about being in isolation?
I miss going to the movies and eating or drinking at my favourite spots. On a heavier note, it upsets me to think about the kids out there, stuck inside with their lunatic parents.

– best thing about being in isolation?
That’s a tough one. I suppose it’s harder to feel like you’ve wasted your time.

favourite book to read in isolation?
– Anything Sam Shepard

– favourite music to listen to in isolation?
Purple Mountains (self titled)
New Skin for the Old Ceremony – Leonard Cohen

– favourite movies to watch in isolation?
Finishing off a Robert Altman marathon. I would have to rank McCabe and Mrs. Miller and California Split at the very top of my list. Elliot Gould’s one-armed piccolo player is sure to lift your spirits.

– what’s the last best thing you cooked?
Ramen and dumplings.

– Is there something else you’d like to tell me?
Don’t believe a word I tell you.