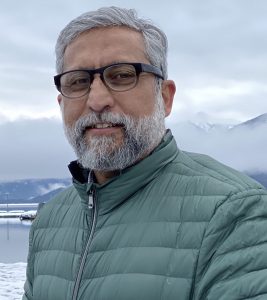 Ali Kazimi is an award-winning filmmaker, critically acclaimed author and visual artist whose work deals with race, social justice, migration, history and memory. Born and raised in India, Kazimi has lived in Toronto since 1983. His body of work spans a broad spectrum of genres and media, and includes three feature documentaries (Narmada: A Valley Rises, Continuous Journey, and Random Acts of Legacy), several short and mid-length documentaries (including Shooting Indians and Runaway Grooms), experimental films and 3D media art installations. In 2019 he received the Governor General’s Award for lifetime achievement in Visual and Media Arts and the University of British Columbia conferred him with an honorary Doctor of Letters degree.

He is an Associate Professor in the Department of Cinema and Media Arts, York University, where he has been teaching since 2006.

He lives in Parkdale in Toronto, with his wife ceramic artist Heidi McKenzie and their two Bengal cats.

Where were you born, where did you grow up, where do you live now?
Born in Hyderabad, India; grew and studied in New Delhi and came to Canada as a graduate student to study film at York University in 1983, have lived in Toronto since.

First film you made, and where and when?
I made my first student film in the film production program at York University in 1983; my directorial debut was in 1994 with Narmada: A Valley Rises, a feature documentary about the struggle to stop a World Bank funded dam in India.

Latest film you made, and where and when?
Random Acts of Legacy, is a feature documentary I finished in 2016, based on a box of deteriorating 16mm home movies filmed between 1936 and 1953 shot by Silas Fung, a Chinese American commercial artist from Chicago. The film was shot in Chicago, Maryland, Seattle and Vancouver.

Describe your current living space.
My wife, ceramic artist Heidi McKenzie and I live in a small Victorian house in Parkdale, with basement studios.

In the history of cinema whose isolation move would you want to see?
Akira Kurosawa.

Worst thing about being in isolation?
Not being able to play with the kids in our lives.

Best thing about being in isolation?
The quiet and the clean air.

Favourite music to listen to in isolation?
Wide range – from classical to jazz to South Asian fusion.

Favourite movies to watch in isolation?
Revisited the films of Joseph Losey.

Favourite meal in isolation?
Idli and dosa with sambhar.

What’s the last best thing you cooked?
Idli and dosa with sambhar.