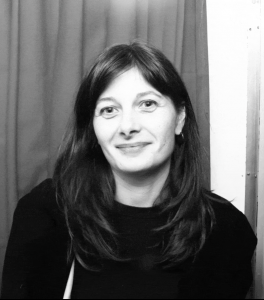 Brett Story is a filmmaker and writer based in Toronto. Her films have screened internationally at festivals such as CPH-DOX, the Viennale, SXSW, True/False, Hot Docs, and Sheffield Doc/Fest. Her feature films include 2016’s award-winning The Prison in Twelve Landscapes and 2019’s The Hottest August. Brett is the author of the book, Prison Land (2019) and co-editor of the forthcoming volume, Digital Life in the Global City. She has held fellowships from the Guggenheim Foundation and the Sundance Documentary Institute and was named one of Variety’s 10 Documentary Filmmakers to Watch in 2019. Brett is currently an assistant professor in the School of Image Arts at Ryerson University.

Where were you born, where did you grow up, where do you live now?
I was born in England, lived for a few years in the West Bank of Palestine, and grew up on Manitoulin Island. I now live in Toronto.

First film you made, and where and when?
A rough and heartfelt activist film about gentrification called Going Condo set in Montreal, complete with very sentimental super8 footage of trains scored to the strings of the band The Dirty Three. Made it in 2006.

Latest film you made, and where and when?
The Hottest August, made in 2019, set in New York. A film about living with futurelessness.

Describe your current living space.
A small lovely row house with a porch that I sit on with my toddler. Inside, books and dust everywhere.

What Canadian would you challenge to make an isolation movie?
Any cop, just to keep him or her off the street.

In the history of cinema whose isolation move would you want to see?
Sarah Maldoror and St. Clair Bourne

Worst thing about being in isolation?
Missing out on public life. Streets full of strangers. Those things that remind us that we belong not just to private enclaves, but to something called society.

Best thing about being in isolation?
Not getting COVID.

Favourite book to read in isolation?
The Mirror and the Light, Hilary Mantel

Favourite music to listen to in isolation?
I listen to a lot of Michael Hurley. Good for happy toddlers and sad grown ups alike.

Favourite movies to watch in isolation?
Does My Brilliant Friend, the HBO series based on the Elena Ferrente novels, count as a movie?

Favourite meal in isolation?
Strawberry shortcake, which my partner bakes far too frequently.

What’s the last best thing you cooked?
I don’t cook.