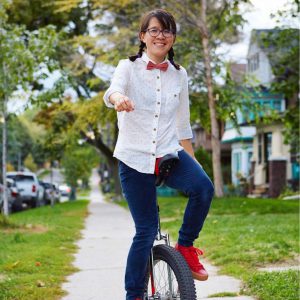 Celeste Koon is a colourful and quirky filmmaker with a wild imagination. She has written and directed a number of short narrative films for children and youth that have played international film festivals across the globe. Her personal short documentary Love Letters from Everest is now streaming on CBC gem and internationally on CBC’s YouTube channel. Celeste and her rabbit Moulee are currently self-isolating with her family in Toronto.

First film I was proud to show publicly I made at Ryerson in 2009. Before that I’d made shorts for class and some were pretty decent but the one in 2009 was the first to go to festivals and get some recognition.

Love Letters From Everest was made for CBC Short Docs and produced by Storyline Entertainment. It is a documentary about my grandparents Fritz and Barbara who, though they died before I was born, I’ve gotten to know through their letters to one another while my grandfather was a part of the 1956 Swiss Everest expedition. It was released February 7th of this year on CBC Gem and CBC’s YouTube Channel. Before that it played 7 international film festivals.

Being in isolation was making me really sad and anxious so after quarantining 14 days in our apartment my rabbit Moulee and I moved to my parents’ so that we had company during this difficult time. It is squishy and sometimes hard to concentrate and feel productive but better to be happy and around people that love you than sad and writing the next award-winning film or great literary opus.

Cirque du Soleil. The question didn’t ask for feasible so here’s me dreaming big. I don’t need to see pop-stars singing from home (they were great in all the various events) I want to see the entirety of Cirque du Soleil done from each performer’s home – flying trapeze is off the hook as you can’t fit one of those in anyone’s home but I expect juggling kitchen knives, balancing people on top of chairs on top of people, flips and contortions, and costumes!

– In the history of cinema who’s isolation move would you want to see?

Crying for no exact reason except that it’s all a bit sad and very overwhelming. Lashing out at the people you love because they’re there and it’s all a lot to handle.

I am taking a BIPOC Kids TV Writing bootcamp. It is full of AMAZING people, run by even more spectacular people, and motivating myself to write, create, and imagine!

I just read Lucy and Linh by Alice Pung. It was a funny yet thought provoking read. It is a teen book but I’m reading lots of kids and teen stuff to get in the right mindset for writing.

Not music but what I’ve been listening to is the BBC Comedy Panel Show The Unbelievable Truth.

I’m going to say a TV show. I came across this 6 episode British Show called After Hours about an internet radio show run on a boat by two fun and quirky people. It isn’t a plot heavy show but it’s a show that leaves you feeling happy. It also has great music.

My mum made a deeeelicious sweet potato lentil curry that had quite a bit of lemon and spice and was so tasty.

My isolation hero? I am so thankful to all the frontline workers in hospitals, grocery stores, and just keeping the city running. These people are putting their lives on the line everyday. But I am going to give a special callout to my veterinarian practice The Jameson Queen Animal Hospital. Last year my rabbit, Moulee, had a very dangerous surgery that most vets might not have risked doing. Moulee survived!! But in the midst of COVID-19 she had a few days where she was feeling under the weather and Dr. Munn, Kirsti, Trevor, and Michelle made sure Moulee was treated in a way they made me know she was getting the best care without causing extra anxiety of COVID exposure to me. I also know that they have children, pets, and families at home but they still gave my rabbit all the care and love.

I also want to single out Paul Taylor and Foodshare. Self-care and personal mental health is so important right now. Even though you want to do good and be good it is hard right now to think beyond the walls around you and all the anxieties filling your head. Thankfully people like Paul and organizations like FoodShare always remember to think of helping others.