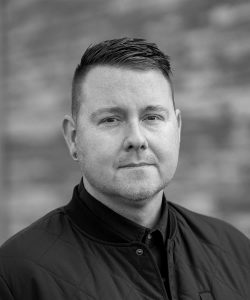 Cliff Caines is an independent filmmaker based in Toronto, Canada. His films have screened internationally at festivals including the Toronto International Film Festival, CPH:DOX, RIDM – the Montreal International Documentary Festival, and DOK.fest Munich. His first feature-length film A Rock and a Hard Place received an Honourable Mention for the Colin Low Award for Canadian Documentary at the 2015 DOXA Documentary Film Festival. Caines holds a MFA in Studio Arts: Film Production from Concordia University, and an AOCAD in Integrated Media from the Ontario College of Art & Design. He is an alumnus of the 2012 TIFF Talent Lab, the 2015 RIDM DCM Talent Lab, and the DOC Institute 2020 Breakthrough Program.

Where were you born, where did you grow up, where do you live now?
I was born in Winnipeg, but grew up in Red Lake, a gold-mining community in Northwestern Ontario. I’m based in Toronto now.

First film you made, and where and when?
A student film called Absence, made in Toronto while studying at the Ontario College of Art & Design in 2000. I co-directed it with Ryan A. Randall, who is still one of my closest collaborators 20-years later! We shot on 16mm black & white film stock, and used a stop-motion, frame-by-frame animation technique called ‘pixelation’ with a Bolex camera. It was an homage to the work of our then film instructor, the wonderful Wrik Mead.

Latest film you made, and where and when?
Workhorse — a documentary on horses and agricultural labour shot in rural communities across Southern Ontario in 2016/17. It premiered at RIDM in late 2019 (pre-pandemic). Sadly, we were really just starting our festival rounds when the pandemic hit. It’s heartbreaking not to be able to share the film in the cinema now (especially locally), but I’m impressed with festivals that are seeking and offering alternatives that genuinely support independent filmmakers.

Describe your current living space.
I share an open-concept live/work studio with my partner and our cat in Northwest Toronto — in what was once a Patons & Baldwins/Coats Paton Yarn Factory, known for its Beehive brand knitting yarn. You can still find a bumblebee carved into the stone of the art deco entrance.

What Canadian would you challenge to make an isolation movie?
Tanya Tagaq.

In the history of cinema whose isolation movie would you want to see?
An ‘exquisite corpse’ film made between Luis Buñuel and Michael Haneke, exchanged through the mail.

Worst thing about being in isolation?
Close-talkers.

Best thing about being in isolation?
Our espresso machine.

Favourite book to read in isolation?
Zona: A Book About a Film About a Journey to a Room by Geoff Dyer.

Favourite music to listen to in isolation?
Tina Turner.

Favourite movies to watch in isolation?
I’m working my way through Frederick Wiseman’s filmography on Kanopy these days. I particularly recommend Ex Libris (2017), which elicited more than a few tears in light of our current reality. Mad Max: Fury Road (2015) is pretty great too.

Any other question you’d like to answer?
Can’t think of any.