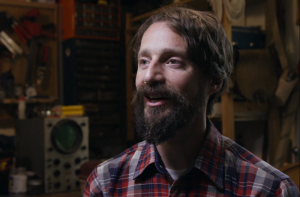 Curtis L. Wiebe is an art generalist.  He has been an animator, illustrator, sculptor, musician, puppeteer and filmmaker among other things. Motivated by flights of fancy, humor, the divine and the bizarre, Curtis attempts to follow the spirit of creativity with the blind enthusiasm of a child. Sometimes he succeeds.

Curtis lives and works as an art teacher in Winnipeg, MB Canada.

Where were you born, where did you grow up, where do you live now?
Taber AB, Canada.  I grew up in several small towns in Saskatchewan (Eyebrow and Drake).  I currently live in Winnipeg. MB.

First film you made, and where and when?
First film I made was, The Stoning of Stephan:  A stop-motion animated short film based on a bible story.  This was done while attending Swift Current Bible Institute in Swift Current Sask.

Latest film you made, and where and when?
I am currently working on a short film called Regular Guy featuring a puppet named Gorge. My last “serious” short film (one with a budget) was Of Truth and Magic (2014).

Describe your current living space.
I live in a 100-year-old house with my wife and 4-year-old son.

What Canadian would you challenge to make an isolation movie?
I would challenge Winnipeg filmmaker Mike Maryniuk to make a Pandemic film. I would be surprised if he hasn’t already.

Worst thing about being in isolation?
Paranoia.

Best thing about being in isolation?
My sourdough bread isn’t too bad!

Favourite book to read in isolation?
Uncle John’s Bathroom Reader. Not necessarily my favourite but it’s the one I’ve read the most during the pandemic.

Favourite music to listen to in isolation?
Stone in Focus by Aphex Twin.

Favourite movies to watch in isolation?
The 1984 Swedish fantasy film: Ronia, the Robber’s Daughter.  It’s got all the wildness, freedom, fear and joy of childhood.