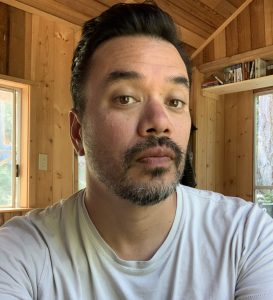 Living in: Vancouver/Southern Gulf Islands, BC

Dylan Akio Smith grew up in Vancouver in the 70s/80s as a young performer in circuses, stage shows and once booked a part on the tv show Airwolf II as an afghan freedom fighter. Graduating from the film production program at UBC in 2000, Dylan began working in film/tv as a gaffer on Canadian independent films such as Last Wedding and the Delicate Art of Parking and was exposed to many different types of production styles during this time. Dylan soon began directing short films with The Bug (2002) and Man Feel Pain (2004) which won Best Canadian Short at the Toronto International Film Festival. Dylan has made 2 feature films – The Cabin Movie (2005) and Doppelganger Paul (2011). Both films premiered at TIFF and were distributed internationally. Dylan currently works as a cinematic director at EA Sports in Burnaby, B.C.

Where were you born, where did you grow up, where do you live now?
Vancouver BC – born, raised and live currently – man no wonder I need to get away

First film you made, and where and when?
Well first actual film would have been a movie called Trivial Pursuit (1998) I made to get into film school in Vancouver. I had a super 8 camera when I was a kid though so had done a lot of noodling before that.

Latest film you made, and where and when?
latest film I directed was my last feature length film called Doppelganger Paul (2011) – it was shot in Vancouver and Portland and some areas in between

Describe your current living space.
We are currently living on Galiano Island with my parents and I am working remotely at EA Sports from a little 10×10 cabin off the side of the house. We are not sure when we are returning to our place in Vancouver. Most likely September for school at the latest, but that all depends on how things go.

What Canadian would you challenge to make an isolation movie?
Denis Villenueve?? I just want to see him trying to make Dune at the same time as going through this…

Worst thing about being in isolation?
Being alone with your existential dread

Best thing about being in isolation?
Time with my kids

Favourite book to read in isolation?
Haruki Murakami – any of them really

Favourite music to listen to in isolation?
Elbow – definitely

Favourite meal in isolation?
Tacos – mostly fish tacos but other kinds too

What’s the last best thing you cooked?
My wife made a really good vegan pizza with locally milled spelt flour the other day.

Any other question you’d like to answer?
Best games I’m playing in isolation:
Ghost of Tsushima, NHL20 (CHEL mode), Golf Rival on my phone and FIFA of course