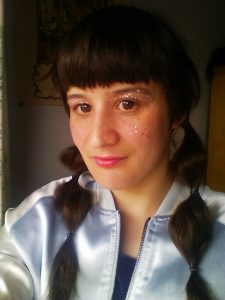 I am a filmmaker based in Montreal, currently pursuing my Master’s Degree in Film Production at Concordia University. I explore cinema because of its embodied affect and the experience of cinema spectatorship’s resemblance to dreams. I like to turn things inside out and illustrate the unseen. I love genre film, but vacillate and mix my absurd narratives projects with formal explorations. I play in the space between figurative and abstract to create brainteasers we understand enough to want to put it together, but the elements never quite add up. The viewer is encouraged to question my surrealist propositions, as I propose films that avoid fixed meanings preferring the ambiguous and divisive. I work in-between spaces looking to subvert perceived binaries such as biological/digital, inside/outside, mind/body, material/conceptual, attraction/disgust, bad/good taste. The resulting projects are stylized, saturated, camp, visceral and psychedelic films.

Where were you born, where did you grow up, where do you live now?
I was born in Kingston Ontario. I grew up in Montreal where I still live.

First film you made, and where and when?
I made a ghost film in high school where I remember flickering the light switch on and off for effect as my friend, the ghost, tried to make a dramatic turn to face the camera. I have no memory of the resulting film.

Latest film you made, and where and when?
Last summer I made a music video for and with a friend in Montreal called Antidote by Star Canyon

Describe your current living space.
I live alone with two small plants named Philipa and Kiri in a small studio apartment at the centre of the island. On a bad day, I ponder how it has the same person to space ratio as a hamster to it’s cage. On a good day, I cherish my balcony from where I’ve watched the trees bloom unlike before.

What Canadian would you challenge to make an isolation movie?
Guy Maddin. I would watch his TikToks. Does Guy Maddin have a TikTok account?

In the history of cinema whose isolation movie would you want to see?
I’m imagining Jean Cocteau with an iPhone or Arthur Lipsett with the internet and editing software.

Worst thing about being in isolation?
Losing your mind.

Best thing about being in isolation?
Losing your mind.

Favourite book to read in isolation?
I’ll let you know when I’m done reading them. Luckily, I am reading them faster.

Favourite music to listen to in isolation?
The neighbor’s, echoing from across the street.

Favourite meal in isolation?
Breakfast, but that has nothing to do with isolation. However, I have given myself permission to have breakfast three times in a day.

What’s the last best thing you cooked?
Frozen pizza … because I didn’t have to make it.