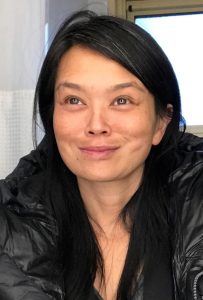 Janine Fung is an award-winning Producer/Director/ Writer based in Toronto. Her two critically-acclaimed dramatic short films, Leftovers (1994), which Fung wrote about a mother, a turkey, a knife and a misunderstanding, and 4AM (2011), a powerful story about life in Belmont, premiered at the Toronto International Film Festival. She was selected as one of eight emerging producers for the DOC Institute Breakthrough Program 2015. Her first feature documentary, La Gaita, the story of the Lara Brothers, was winner of the Peoples Choice Award: Best Documentary Film and the Special Jury Mention Award at the Trinidad & Tobago Film Festival in 2012. Her films have been internationally screened in NYC, Los Angeles, Berlin, Paris, Helsinki, London, Toronto, Vancouver, Frankfurt, Montreal, Munich, Trinidad, Toulouse and Hong Kong. Janine wrote and directed her first dramatic feature, The Doctor’s Daughter or the Secret and the Lie (05), which had it’s World Premiered at the San Francisco International LGBTQ Film Festival, This film later joined the Gay & Lesbian International Film Festival Circuit, screening in nine more cities world wide: FRAMELINE Los Angeles, Munich, Frankfurt, Berlin, Cologne, Atlanta, Toronto, Port of Spain Trinidad and Croatia.

Where were you born, where did you grow up, where do you live now?
I was born in Trinidad, Port of Spain. I grew up in Toronto, Canada and I am currently back in Toronto.

First film you made, and where and when?
My first film was called Leftovers and it was shot and edited in Toronto in 1994.

Latest film you made, and where and when?
My latest film was called Dance – The Story of Dai Ailian. It was a short doc about a Trinidadian woman ballerina who spoke no Chinese and went to China and became the cofounder of the National Ballet of China. I used footage from China, Trinidad and the UK. I edited it in Toronto and Trinidad in 2013.

Describe your current living space.
After moving back from the UK, I moved into my family home in Toronto with my parents who are quite old now and my oldest sister and her 4 children (who just came back from living in Tokyo).

In the history of cinema who’s isolation move would you want to see?
I would like to see everyone’s film actually, so curious what it’s been like for everyone in their daily routines and their surroundings.

Worst thing about being in isolation?
My sister was stuck in Nepal and the Nepalese government had just shut down their borders through a military lockdown. The Kathmandu airport had also shut down and most airlines were no longer flying. Canada had no plans of sending a repatriation flight to Nepal and I was feeling so helpless reading the news of all the deaths happening globally. We worked really hard to get her MP and several friend’s global contacts to help get her on an American repatriation plane so she could come home. It was pretty scary.

Best thing about being in isolation?
Time

Favourite book to read in isolation?
Haven’t read anything as yet but plan to read Oscar Wilde, The Critic as Artist and another book from my sister Karen called Quiet.

Favourite music to listen to in isolation?
Classical music and movie soundtracks.

Favourite movies to watch in isolation?
Everything! My last film was Capernaum.

What’s the last best thing you cooked?
I cooked a turkey at our quarantine Easter