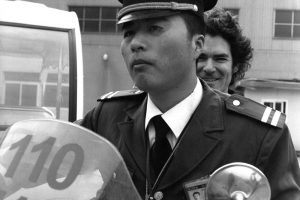 John Price has been working with new forms of experimental documentary and diary film since 1986.  His works have screened worldwide at festivals and museums including TIFF, Rotterdam, Berlin, CPH DOX, Punto de Vista, VIFF, Images, Media City and many others. Price has an MFA from Concordia University, was a long-serving board member of the Liaison of Independent Filmmakers of Toronto, and has taught filmmaking and cinematography at Filmwerkplaats, Rotterdam and Humber College. He has produced 16mm film projections for opera and dance, and has worked as a cinematographer with directors including Bruce Macdonald, Charles Officer, Jennifer Baichwal, Liz Marshal and many others.

Where were you born, where did you grow up, where do you live now?
Born in Flemington New Jersey on Canada Day 1967… my Canadian father urged my Jamaican mother to have me out on Canada’s 100th birthday… she was successful  :)… They moved to Montreal in ’69 so I was there until I was 15. Went to high school outside of Toronto… bounced around between Montreal and Vancouver after that… BComm at McGill… MFA at Concordia and then started working as a camera assistant in 1994 to pay off the loans… I’ve been in Toronto since 2000…

First film you made, and where and when?
Made a little super 8 film in a moldy basement in Ottawa… 1988 with a friend I was painting fences with… a psychodrama 🙂

Latest film you made, and where and when?
I’m finishing up a film that was commissioned by Oona Mosna and the Media City festival. They got a grant to send me and 2 other filmmakers to the Atacama desert 5 years ago. I’ve been shooting a lot for other directors since and haven’t had time to play with the material. The pandemic changed that.

Describe your current living space.
A dream… there is enough space for my partner and our 2 teens… we got the place 17 years ago when the Junction neighbourhood of Toronto was considered too far from the city… We have an amazing community of neighbours… We are so fortunate.

What Canadian would you challenge to make an isolation movie?
Daniel MacIvor

Worst thing about being in isolation?
The uncertainty…

Best thing about being in isolation?
The uncertainty…

Favourite book to read in isolation?

I’ve only started to read one… Drumblair: Memories of a Jamaican Childhood – a completely random find in a small town used bookstore…

Favourite music to listen to in isolation?
Yodelling Slim Clark

Favourite movies to watch in isolation?
Docs… did Trump then Hillary then The Last Dance…

Favourite meal in isolation?
They have all been great… family dinner every night…

What’s the last best thing you cooked?
Rice and peas… my grandmothers recipe….