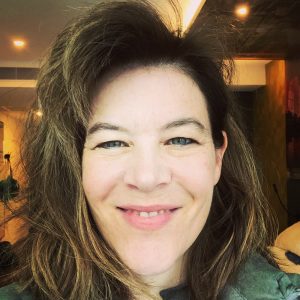 Katerina Cizek is a two-time Emmy and Peabody-winning documentarian working across emergent platforms. Based in Toronto, she is the artistic director and co-founder of the Co-Creation Studio at MIT Open Documentary Lab, where she wrote (with Uricchio et al.) the world’s first field study on co-creating media called Collective Wisdom. For over a decade at the National Film Board of Canada, Cizek helped transform the organization into a world-leading digital hub, as the creative force behind the award-winning projects HIGHRISE and Filmmaker-in-Residence. Cizek’s earlier documentaries include the Hampton-Prize winner Seeing is Believing: Handicams, Human Rights and the News (2002, co-directed with Peter Wintonick). Cizek is a member of the Directors’ Guild of Canada. She serves as an advisor to the Sundance Institutes’ New Frontier Lab, Stories of Change Program, and ESoDoc. She is a Distinguished Visiting Professor at Ryerson University’s Faculty of Communications, Arts and Design.

Where were you born, where did you grow up, where do you live now?
Born in Waterloo Ontario, grew up in Waterloo and Montreal. Currently live in Toronto.

First film you made, and where and when?
First documentary was about the Czech Velvet Revolution in early 90s.

Latest film you made, and where and when?
I made Supreme Law an interactive documentary with the National Film Board, released in 2019.

Describe your current living space.
Top two floors of a house with my partner and kid. Small but efficient space. We feel fortunate to have a safe place to shelter.

What Canadian would you challenge to make an isolation movie?
Dawn Wilkinson, Paisley Smith (both in LA), Min Sook Lee.

In the history of cinema whose isolation move would you want to see?
Dziga Vertov, Agnes Varda.

Worst thing about being in isolation?
Collectively going into isolation and collectively coming out of it. For us as a family, the hardest thing has been being separated from my dad, worrying for his life and his care, and worrying for all those in forced densities, such as cramped living and working conditions.

Best thing about being in isolation?
Urgency to re-assess everything personally and collectively as a species.

Favourite book to read in isolation?
How to Pronounce Knife by Souvankham Thammavongsa.

Favourite music to listen to in isolation?
Silence.

Favourite movies to watch in isolation?
I’ve been watching a lot of Hot Docs Festival: I have loved these in particular: Wintopia, A Thousand Cuts, #Blessed, Stateless, Coded Bias, Keyboard Fantasies. As for documentaries, I can’t wait to see the new Bruce Lee documentary, Be Like Water.

Favourite meal in isolation?
I’ve had a huge appreciation of all and any food, especially asparagus and rhubarb right now.