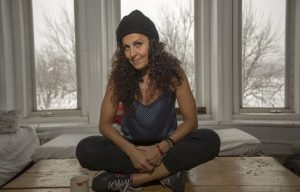 Laura Bari is an Argentinian-born Montréal-based film director and producer. She studied pedagogy at Université du Québec à Montréal, specializing in psychopathology. In many of her works, she pushes the boundaries between reality and dreams and uses film as a way to merge art, culture, education and mental-health issues.

Antoine (2009), her first full-length film as producer/director, about the imaginary life of a blind boy, was shown at some 30 festivals around the world, winning 15 prizes. Her second film Ariel (2013) is a journey of a man who rebuilds his identity after a terrible accident.

The final film of Bari’s trilogy is Primas (2018), an intimate and metaphorical portrait of two Argentinean adolescents, who survive heinous crimes against them from their childhood.

The trilogy have won many awards and screened at many festivals including IDFA, Hot Docs, Tribeca, Gothenburg, RIDM, True/False, and DOXA.

Si is Laura’s first short and will be the first of ten shorts dedicated to unknown heroes –  made from her paintings, poems and dances with the camera.

Where were you born, where did you grow up, where do you live now?
I was bon in the city of Mendoza, Argentina and moved to Montreal at the age of 24 with my two-year-old daughter.

Latest film you made, and where and when?

Describe your current living space.
A space with enough room to be silent and listen to the wind – with windows and a balcony to look at the sunset.

What Canadian would you challenge to make an isolation movie?
Kalina Berrtin.

Worst thing about being in isolation?

– there was a family emergency in Argentina, and I was not be available to travel.
– losing students because of their socio – cultural conditions, where education is easier for one portion of our youth.
– to learn about the death of a 40 year-old-man – Marcelin François, who was born in Haiti and arrived in Canada in 2015. He worked 7 days a week, cleaning residences for the elderly, became sick and died in the arms of his wife. His family, including 3 children, were put in isolation and did not even know where he was buried. I dedicate this film to him and to my friend Pierre Allard, an artist-activist, who has been with me constantly since his death 2 years ago.

Best thing about being in isolation?
To hear the children’s voices playing hide and seek.
To paint.
To really be coherent with the time in my mind.

Favourite music to listen to in isolation?
Anything from Nicolás Jaar.

Any other question you’d like to answer?
When, will we get a better world for the most vulnerable? Are we going to stop abuse and start to participate?