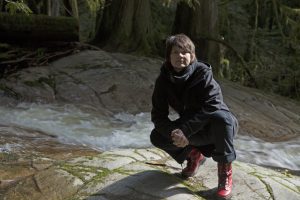 Since the 1990s, Liz Marshall has written, directed, produced and filmed diverse international and socially conscious documentaries. Her work has been released theatrically, been broadcast globally, made available digitally, and has screened for hundreds of grassroots communities around the globe. Marshall’s feature-length films explore social justice and environmental themes through strong characters. The impact of Liz’s acclaimed The Ghosts In Our Machine (2013) is reflected in an extensive global evaluation report funded by the Doc Society. Marshall’s current documentary Meat the Future (2020), chronicles the birth of the “cell-based” meat industry in America through the eyes of pioneer Dr. Uma Valeti. Previous titles include Midian Farm (2018), Water On The Table (2010), the HIV/AIDS trilogy for the Stephen Lewis Foundation (2007), the War Child Canada/MuchMusic special Musicians in the Warzone (2001), and the 1995 music documentary archive of folk-icon Ani DiFranco.

Where were you born, where did you grow up, where do you live now?
I was born in Toronto and spent formative years in Ontario and in British Columbia until settling in Toronto at the age of 8. My cultural identity, creative career, social-political values, and emotional roots are deeply shaped by this city. And, I spent childhood summers playing and imagining on the salty sorrel beaches of the Sunshine Coast, British Columbia, where my family lives. I am a creature of both worlds and I split my time between both places; both are home.

First film you made, and where and when?
Well, my first documentary experience (but not a fully completed film) is worth noting. Fresh out of Ryerson University film school in the mid-90s, I followed my passion for music documentaries and American folk-icon Ani DiFranco commissioned me to film her life on the road as a touring musician. I hired my Ryerson classmate Chris Romeike to be the cinematographer, and I directed and co-filmed a multi-media road collage consisting of super8mm and 16mm film, hi8 video, and digital audio recordings of Ani DiFranco in parts of Canada and the US. It was intoxicating.

Latest film you made, and where and when?
Meat the Future is a 2020 feature documentary currently on the film festival circuit. In May of this year, during Covid lockdown, it had its world broadcast premiere as part of “Hot Docs At Home on CBC”, and was a Special Presentation film at Hot Docs 2020. Meat the Future is a timely documentary about “cultivated meat”, a food science that grows real meat from animal cells in a controlled environment, free from disease and infection, without the need to breed, raise and slaughter animals.

Describe your current living space
A house in a quiet Toronto neighbourhood, straddling Leslieville and Riverdale. A big backyard makes social distancing with friends and colleagues easy. My office space makes work-life enjoyable. The kitchen space is open and spacious. I love to cook, vegan, gluten free, organic and local when possible.

What Canadian would you challenge to make an isolation movie?
Toronto-based filmmaker Esery Mondesir.

In the history of cinema whose isolation movie would you want to see?
Maya Deren

Worst thing about being in isolation?
Releasing a film that took four years to make. Nothing will ever compare to the kinesthetic experience of introducing a film to a room filled with bodies hearts and minds; engaging in lively Q&A’s with audiences, colleagues, peers, and the film’s cast. And of course, travel.

Best thing about being in isolation?
Introversion, being a home-body. Independence.

Favourite music to listen to in isolation?
Piano.

Favourite movies to watch in isolation?
13th by Ava DuVernay; Portrait of a Lady on Fire by Céline Sciamma; The Walrus and the Whistleblower by Nathalie Bibeau; Crip Camp by Nicole Newnham and James LeBrecht; Okja by Bong Joon-ho; Mary Magdalene by Garth Davis; Joni 75: A Birthday Celebration by Martyn Atkins; BlacKkKlansman by Spike Lee; Tell Me Who I Am by Ed Perkins; Toni Morrison: The Pieces I Am by Timothy Greenfield-Sanders; Mr. Jane and Finch by Ngardy Conteh George.

What’s the last best thing you cooked?
A pot of organic hearty vegetable blonde miso soup. Nourishing and delicious for a rainy day.