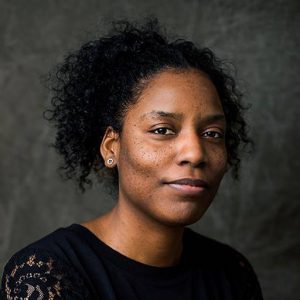 Miryam Charles is a Montreal based Canadian filmmaker. She studied cinema at Concordia University and has worked as a director, producer, writer, and cinematographer. Her short films include Fly, Fly Sadness (2015), Towards the Colonies (2016), A Fortress (2018), and Three Atlas (2018). Her works have been screened at various film festivals around the world. Her latest short film Second Generation (2019) was presented at TIFF. A retrospective of her work was presented at the cinémathèque québécoise (2019). In 2020, a second retrospective was presented during the fourth edition of the Third Horizon Film Festival in addition to an installation at the Leonard and Ellen Bina Gallery in Montreal. She is currently working on her first documentary feature, which has been awarded a grant from the Talents to Watch Program (Telefilm Canada).

Where were you born, where did you grow up, where do you live now?
I grew up in Laval and I am currently living in Montreal.

First film you made, and where and when?
My first film was Fly, Fly sadness. I made it in 2015. The film was shot in Haiti.

Latest film you made, and where and when?
My latest film was this Isolation film and it was made last week.

Describe your current living space.
I live in a 2 bedroom flat. I live alone so I have a lot of space. I am very grateful and lucky to have a roof over my head.

What Canadian would you challenge to make an isolation movie?
Can I think about it?

In the history of cinema whose isolation movie would you want to see?
Maybe Thérèse by Alain Cavalier. It’s not strictly an isolation film but the main character is confined to a convent.

Worst thing about being in isolation?
The worst part is not seeing my family on a regular basis. To be around a table with them. Laughing, eating… There’s no substitute for that.

Best thing about being in isolation?
I’m an introvert so it’s a bit of a party every day (even if I miss my family).

Favourite music to listen to in isolation?
A few albums :

The jungle is the only way out – Meraba
The Return – Sampa the Great
Dominique Fils-Aimé – Stay Tuned!
Amine Bouhafa – You Will Die at Twenty (Original Motion Picture Soundtrack)
Blinky Bill – Everyone’s Just Winging It And Other Fly Tales
Leyla McCalla – The Capitalist Blues

Favourite meal in isolation?
Pasta, tofu and veggies –  it’s so easy to make.

What’s the last best thing you cooked?
Rice (djon djon) like my mother used to do. I am making her proud even though it’s not as good as her’s.