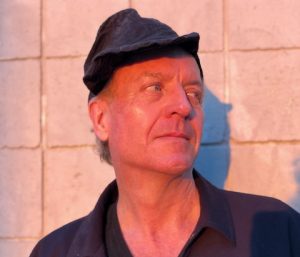 Peter Lynch’s work has been widely celebrated and exhibited around the world. He has recently completed Birdland, his first narrative feature film  — a contemporary noir which he directed co-wrote, and co- produced. Birdland belongs to a chapter of new digital, theatrical mini series television works and podcasts Lynch is developing over the next several years including “Galveston” a film adaption of Paul Quarrington’s best-selling novel.

Lynch is responsible for several internationally acclaimed feature films and shorts. His first dramatic short Arrowhead received a Genie Award in 1994. In 1996, Lynch made the wildly successful Project Grizzly, one of the most acclaimed Canadian documentaries of all time, and spoofed the next year on The Simpsons. This was followed by his docu/drama The Herd, which Lynch co-wrote and directed, and was a festival hit worldwide. In 200, Cyberman, a portrait of Cyborg Steve Mann, played to critical acclaim at over 50 international film festivals and was listed as one of the top 10 feature films of 2002 by Film Comment to name a few. He is currently working on finishing an experimental feature based on Iris Haussler’s landmark installation performance piece The Legacy Of Joseph Wagenbach. Lynch was a significant player in the early video/new media revolution, In 1982-1987 He co-founded, co-produced and co-directed Video Culture International, a landmark video new media festival, which included projects with Nam June Paik, Bill Viola and Brian Eno.

Where were you born, where did you grow up, where do you live now?
I was born in Toronto at Women’s College Hospital around 7:15 pm June 12,1957. From one to four I lived around the Golden Mile at Victoria Park and Eglington on Tinder Crescent. Then 4-18 I lived in Thorncliffe Park. I currently live in The Brockton Village in the West End where I have lived for most of my life.

First film you made, and where and when?
If I discount some super 8 films I made in high school or music videos, it was a documentary St Bruno My Eyes As A Stranger. It was shot around College Street in Little Italy in1992 followed by my first short drama Arrowhead shot in Thorncliffe Park.

Latest film you made, and where and when?
I made a dramatic feature film a contemporary surveillance noir called Birdland shot in downtown Toronto and had its theatrical release in 2018.

Describe your current living space.
I live in The Brockton village in a once more working class Portuguese neighbourhood that is close to Dundas West at the top of Parkdale. I am on the second floor of a typical Edwardian era house. I have split with my ex wife. I share two pets, a dog Charlie and a cat Omar. I have a lot of books and the art I collect is mostly made by friends – I take great solace and comfort in living with their work.

What Canadian would you challenge to make an isolation movie?
David Cronenberg

In the history of cinema whose isolation move would you want to see?
Andrei Tarkovsky but he already made it-Solaris.

Worst thing about being in isolation?
Not being able to just invite friends over or being able to throw parties or drop in on my favourite haunts. Also, I hate how quickly the dishes pile up when you are always eating at home.

Best thing about being in isolation?
Quiet space for self-reflection and having the space to be able to largely do what you feel like when you feel like it. Also doing zoom meetings in my underwear.  Hearing the birds sing more without the usual drone of the city pulse.

Favourite music to listen to in isolation?
I’ve been making thematic multi genre eclectic playlists from Kraftverk, French pop music homages to Gangsta rap but have been listening to a lot of Curtis Mayfield and James Brown.

Favourite movies to watch in isolation?
Noirs and Westerns

What’s the last best thing you cooked?
Sautéed grass fed lamb chops with fresh rosemary fresh jalapeno, slivers fresh garlic, butter, olive oil and lemon sea salt and pepper. Wild asparagus on the side with the reduction from the lamb, a splash or white wine and a sprinkle of fresh thyme. Yum! Plus an Ontario Pinot Noir from Flat Rock in Niagara to wash it down.

Anything else?
— I kept my sanity during isolation by walking the city with my dog on routes I normally don’t take.