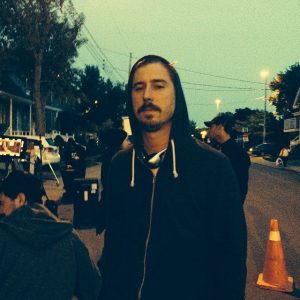 In 2011, McKenna shot his micro budget feature debut The First Winter ’12. During the post-production, McKenna and editor Matthew Rankin co-wrote the Winnipeg Brutalist Manifesto. In 2014, McKenna began incorporating archival materials into his work, which resulted in the shorts Four-Mile Creek ’14, Controversies ’14, and Voices of Kidnapping ’17. In 2015, McKenna directed his French language feature Le coeur de madame Sabali, which was the winner of the Grand Prix at Montreal’s FNC. In 2019, McKenna completed his third feature, Cranks, a film that mixed archival elements in a fiction feature.

Where were you born, where did you grow up, where do you live now?
Winnipeg, Winnipeg, Montreal.

First film you made, and where and when?
Open Window (short), Winnipeg, 2005.

Latest film you made, and where and when?
Cranks (feature), Montreal & Winnipeg, 2019.

Describe your current living space.
Alone in an apartment in Montreal.

What Canadian would you challenge to make an isolation movie?
Guy Maddin.

In the history of cinema whose isolation move would you want to see?
Chris Marker.

Worst thing about being in isolation?
Seeing some friends get really sick from virus and family dying alone.

Best thing about being in isolation?
Writing & catching up with old friends.

Favourite book to read in isolation?
Many. currently reading The Passion According to G.H. by Clarice Lispector.

Favourite music to listen to in isolation?
YouTube music.