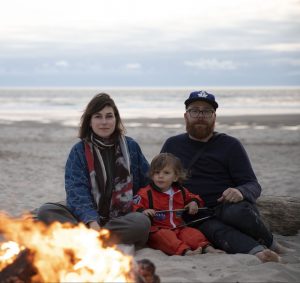 Dave Derewlany is the ginger half of the directing duo Adam and Dave. Their short-form narrative films have screened internationally around the world, including the Toronto International Film Festival, Clermont-Ferrand Short Film Festival, Just For Laughs Festival. Their commercial work has been awarded at the Cannes Lions, D&ADs, The One Show and the AICP Awards.

Adam & Dave’s first television project was the Gemini Award winning Morgan Water’s Show (CBC), which they wrote & directed. The duo has written, directed & produced season 2,3, and 4 of Funny As Hell for HBO Canada and the 1-hour special A Dore to Winnipeg (CBC). Adam & Dave received a Canadian Comedy Award for ‘Best Series Direction’ for their work directing The Jon Dore Television Show (The Comedy Network/IFC). Most recently they created and directed an hour long special “Big Questions, Huge Answers” for Comedy Central, which premiered in 2018.

Sarah Galea-Davis is an award-winning writer/director who works in both fiction and documentary genres. Her fiction credits include the short films Berlin, Can You Wave Bye-Bye? and An Apartment. All three have premiered at the Toronto International Film Festival and played at festivals internationally. Her documentary work has been commissioned by Tate Media, CBC, MSNBC, Logo and Canada Council for the Arts.

Alumnae of the Canadian Film Center’s Director’s Lab, TIFF Talent Lab, and the Reykjavik International Film Festival Talent Lab, Sarah’s work has been nominated for numerous awards including Canadian Screen Awards, Jutras and Golden Sheaf Awards. She won Best Film at the Worldwide Short Film Festival and a Quebec Critics’ award. She is currently developing her first feature film, The Players, with Hawkeye Pictures and was selected to participate in the Women in the Director’s Chair workshop in 2019.

Where were you born, where did you grow up, where do you live now?
Sarah – I was born and raised in Toronto and I currently live in Toronto (but there was a decade in Montreal in between)

First film you made, and where and when?
Sarah – The first film I made was in grade 3, it was called The Horror of the Time Machine and we shot it on the Toronto Island.

Latest film you made, and where and when?

Dave – This is the latest film I’ve made. Last week, in my home.

Describe your current living space.
We live together in a house with a backyard and a three year old.

What Canadian would you challenge to make an isolation movie?
Peter Lynch doing a follow up to Project Grizzly to see how Tory Hurtubese (RIP) would pivot his bear suit to aid in physical distancing

In the history of cinema whose isolation move would you want to see?
Gene Kelly (maybe that’s just because we’ve been watching a lot of Singin’ in the Rain).

Worst thing about being in isolation?
Making this movie.

Best thing about being in isolation?
Making this movie.

Favourite music to listen to in isolation?
Anything but Raffi (no offence Raffi).

Favourite movies to watch in isolation?
Singin’ in the Rain, Fantastic Mr. Fox, My Brilliant Career.